Opinion: A step too far?

So, this is just in: 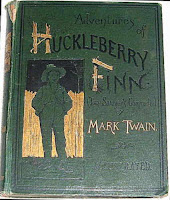 A publisher (NewSouth Books) has removed the "N" word from Huckleberry Finn. Of course that offensive word has no place in current use, but if we do not know where we've been, will we know where we're going...

It's interesting to note that the main theme of the book is one of anti-racism/anti-slavery. The publisher feels that young people shouldn't be exposed to the word. I agree completely no one should USE it, but how does one fully appreciate the zeitgeist of the 1800s if references we deem inappropriate at this point in time are removed from historical writings?

I won't even try to state the obvious by attempting a weak explanation as to why racism is absolutely, fundamentally anathema to anyone with a functioning brain. If you don't know why will reading the word in a book change you one way or the other? Huckleberry Finn isn't a book that many pick up and read outside a scholastic environment - where the appropriate critical analysis is brought to bear on what is written.

What else do we sanitize? Is it censorship, an attempt to re-write history, political correctness gone too far, or a proper response to the times in which we, thankfully, now live?

On a side note, last year a large school district in the southern US decided to limit mention of Thomas Jefferson for his support of separation of church and state, which isn't directly stated in any of the legal documents about the founding of the US. Tea, anyone?
Posted by Docaitta at 6:55 PM