Gardening: Under the Prairie Moon (Nursery)

Wildflowers that belong in more than your back forty 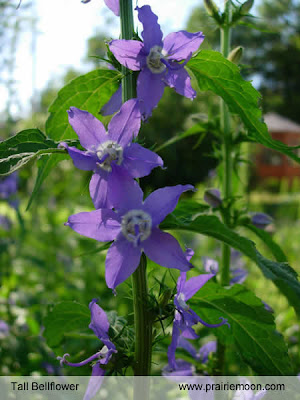 Wildflowers have always held a special place in my heart. I guess that's what growing up in the country will do to you. Those hours of wandering and exploring let the earth seep into your bones, even if you don't realize it at the time. Now I know of a place where I can get seeds for those self-same plants, and grow and appreciate them without having to leave my yard – the ones from my childhood and many, many more.
Established in 1982, Prairie Moon Nursery specializes in wildflowers. It sells both plants and seeds, but only seeds to Canada. That's more than okay by me. I have never seen such a collection of interesting plants. You have to remember, what we call garden plants had to have parent plants from the wild somewhere, and many seem to come from the USA. They are also equal, in my view, to many "cultivated" varieties.
The business began as an outgrowth of the desire by a dedicated group to preserve and propagate wildflowers in the 1970s. I'm sure they were thought of as a very odd bunch. How times have changed. I, for one, am very thankful for their dedication.

From their site: "Organized in 1976 as Minnesota’s first community land cooperative, the Wiscoy Valley endeavor attracted a colorful group of characters, some who had lived in other rural intentional communities. These included adherents to the 1960s ideals of social justice, collective action and the back-to-the-land movement’s respect for resources. This lively cradle was where Prairie Moon was born in 1982."

We purchased several seed packets from them this last fall, one of which was Dutchman's Breeches (Dicentra Cucullaria). It's a relative of our omnipresent Bleeding Heart (Dicentra Spectabilis) 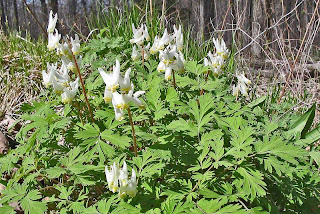 Once again: "Dutchman's Breeches is a true spring woodland ephemeral species. It flowers early in the spring when sunlight hits the woodland floor before the canopy of the trees fill in.  By early summer, the green foliage (which resemble fern-like leaves) will fade to a light yellow (see photo) and eventually will go into total dormancy by mid-summer.
The common name Dutchman's breeches comes from the pair of outer petals which form a swollen 'V' making the hanging flower look like a pair of white breeches/bloomers hung upside-down." 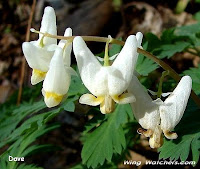 It's quite exciting to think what's slumbering under the snow waiting to emerge in the spring. This site is definitely worth checking out if you have an interest in having uncommon plants—plants that deserve places of reverence in your garden. Cost is very reasonable, and if you purchase a few packets the shipping is as well.
Prairie Moon Nursery
32115 Prairie Lane
Winona, MN  55987
http://www.prairiemoon.com/
Posted by Docaitta at 9:17 PM