Better get this out of the way 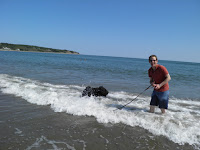 So the first post had a photo of Simon, who is no longer with us. I'm not actually alone, in the dark, mourning my loss. That's not to say that I don't feel sad from time to time either.

I have two other men in my life. This is Henry (on the leash) and Mike (holding it). Henry likes the water. He's six years old. We were married April 24 of last year. Mike and I, not Henry... The photo's from an outing to a local beach. Henry has to stay on the leash. He's goes crazy when the waves crash on shore and would chase them up and down the beach until he dropped. That day he was biting them as they went over his head.

So now you're introduced to the immediate family.

I do have to say though, two Bouviers are no more work, and more than twice the fun, of one alone. Maybe in the future when my heart's not so full we'll do it again.
Posted by Docaitta at 12:18 PM