Design and Opinion: Ever have one of these days?

Actually this post is more about typography than me being as mad as hell. That's a given.
The type of work in the clip above is grouped under the moniker of kinetic typography. I know it isn't a new phenomenon by any means, but for some reason this resonated with me today. Regardless of the subject matter, this technique has great potential if used judiciously. The impact it had on me when I watched it was the impetus for this post. Of course you have to have a client with some guts (or vision or trust) to come with you out on any limb if it's a paying job. All the jesticulation in the world sometimes won't adequately explain what you intend to do – or the final effect it could have.
This example was uploaded by JereHakala, to YouTube. No it's not outstandingly beautiful, or intentionally elegant, but it does makes one think of the raw power of words and the impact they can have when we loose them from 12pt Helvetica. (The YouTube sample is in Helvetica, I know... but I mean "metaphoric" Helvetica... i.e. the mundane and banal.) 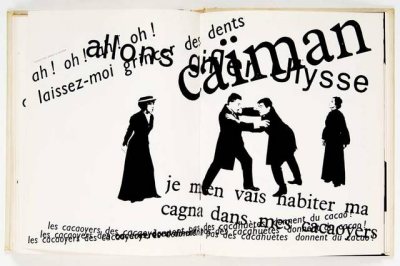 It also makes me wonder what the result would be like if someone did the same to the print version of The Bald Soprano by Eugène Ionesco. The typography in that publication is held up as one of the first examples of expressive typography—where the look of the words added a second layer to the actual meaning. Some critics opine the point of Ionesco's play is the futility of communication in modern (1950s) society.
Of course, in recent years there have been countless examples of this combination of graphics, text and movement in pop culture videos, online and TV commercials. Some are exceptional either in power or beauty; some not so much. Also, like the lady in the Ionesco page above, if everyone is talking someone inevitably decides they have to SHOUT. Then the next has to shout louder. That seldom makes for "civil conversation" either verbally or graphically. It's the equivalent of the car sale starburst. This is one of the most difficult facts to explain to a client. Sometimes a whisper can have more effect than a shout. 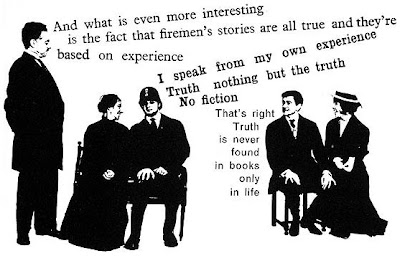 As technology advances we become able to do more and more with greater ease. Think of the impact of page creation and photo manipulation software on an industry little changed from 1920 through to 1990. What we do on a daily basis would be unrecognizable by anyone from pre-90s. We would be/should be amazed. We have been liberated, so to speak.
Technology also means more can do more and more. Get my drift? As design professionals we need to be aware of technologies that can enhance the work we do for clients. At the same time we will have to ensure we surf the tidal wave of mediocre work that will no doubt inundate the marketplace. Will we whisper or will we shout?
When a thing is done well, it is a good thing. When it's done poorly it's desktop publishing.
Posted by Docaitta at 7:12 PM