Best way to get rid of kitchen odors: Eat out. – Phyllis Diller
So how long does it take you to whisk egg whites or knead dough? For me it's not very long, because I have the kitchen machine to beat all kitchen machines: The KitchenAid Professional Series stand mixer. I've had mine for at least 15 years, and it still runs like it's brand new. In this age of disposability, that's quite a feat. Not only that, but it looks like it's brand new (when I wash it…). You see, KitchenAid has barely changed design since 1937. Why mess with perfection? The KitchenAid visually looks like "the tool for the job" and it doesn't disappoint. Nothing says "I'm a serious cook" like one of these sitting on your counter.
Julia Child had a Cobalt Blue KitchenAid on the set of her wonderful PBS cooking shows. I have even spotted a KitchenAid Professional on the set of her original PBS series "The French Chef", from the 1960s. It looks identical to the one on my counter. Amazing. 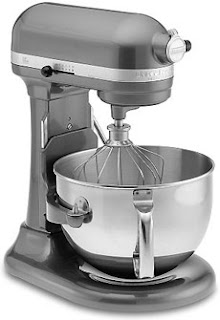 History
The Hobart Manufacturing Company released their first mixer, the H-5, in 1919 but the 1937 model K is what we know as "The KitchenAid" of today. In 1955 KitchenAid starting giving customers color options. Today there are over 40 different colors and finishes from which to choose. 2007 marked the 70th anniversary of the mixer design by Egmont Ahrens. Can many other brands make that boast?
How the name originated
The story goes that a company executive took one home for his wife to test and help come up with a name. She reportedly stated "I don't care what you call it, I know it's the best kitchen aid I have ever had."
Basics
All KitchenAid mixers are 100% metal. No plastic here (except for some of the available attachments… Why, KitchenAid???). It is quick and efficient and in tests has consistently outperformed all other mixers. The KitchenAid Artisan (a smaller version), Classic and 7-speed Hand Mixer all are consistently at the top, or near, in reviews as well.
The Professional Series is equipped with a 475 watt motor, making it the most powerful KitchenAid available. This muscle makes short work of any mixing tasks, even heavy kneading. Its large mixing bowl holds 12 cups. Additional attachments are mounted via the top front of the mixer where they can access the motor.
The KitchenAid Pro 600 is a bit of an oddball in how the mixing actually occurs. I'll try to explain. In "normal" mixers, the beaters rotate and the bowl rotates. In a KitchenAid the bowl is stationary, but the beaters not only turn clockwise, but their mount also rotates counter-clockwise in a "planetary" motion. You have to see it to understand, but it works. The bowl itself has a small bump in the centre so what you're mixing doesn't get clumped down there.
All the stand mixers are 10-speed and feature a "soft start" which means the beaters don't start of at full tilt and fling the contents of the bowl all over your kitchen.
These machines are not inexpensive ($499 CAN), but would you rather buy a new mixer every 5-10 years, or have one you can pass down to your children?
So what do you get when you drop your money?
Standard equipment
and one heck of a machine to use it all.
Attachments
If mixing, kneading and beating aren't quite enough for you, there's a plethora of attachments you can get for your KitchenAid beast.
Grinders, sausage stuffers, pasta rollers, grain mill, juicer and ice cream maker just scratch the surface. For a look at a really good site that has pretty much all of them, visit http://www.fantes.com/mixer-accessories.html
I splurged many years back on a copper liner for mine. You can beat 10 egg whites in that thing – no problem. KitchenAid products are available at all major department stores as well as any serious cooking specialty store.
You can even get the Professional at Canadian Tire! (watch for a sale...)
http://www.canadiantire.ca/AST/browse/8/KitchenBath/2/Appliances/FoodMixers/PRD~0432170P/KitchenAid%252BProfessional%252B5%25252B%252BStand%252BMixer.jsp?locale=en
I wouldn't want to be without mine. For a whole lot of reasons.
………………………………….
If you like this post rewet it using the link at top right, or share it using any of the links below.
Questions? Comments? Derogatory remarks?
Posted by Docaitta at 10:11 AM