I often quote myself. It adds spice to my conversation. – George Bernard Shaw 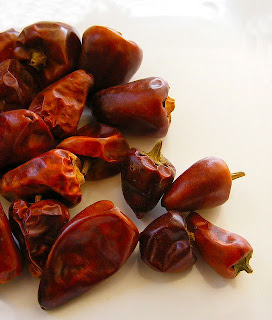 Chilli oil is the secret ingredient in many Szechuan dishes. Not only is it used in recipes, but it is also often serves as a finishing oil with dim sum and other dishes.
You can purchase chilli oil at grocers and Asian specialty stores, but it’s expensive. When I made my Szechuan Soup (an earlier post) I had to purchase some. I paid nearly $4 CDN for a little more than 1/2 cup. This recipe will probably set you back about 75¢.
If there is a secret, it is to heat the oil to the correct temperature. Too hot and it will burn the chillies; too cool and the flavour will not be absorbed as well as needed. Ideally, you need the oil to be 225°F (107.25°C). That’s pretty hot. Get out your candy thermometer, and be careful.
It is easy to alter this basic recipe by adding garlic, ginger or cumin. After you’ve made it once you can adjust as you wish. You may even want to make it hotter by adding more chillies in the steeping stage.
The chilli oil can be used a little more than an hour after being made, but it’s better if you leave the oil for a day or two to allow the flavours to develop.
Szechuan Chilli Oil
Place the flakes in a heat resistant bowl or jar. Heat the oil in a heavy skillet to 225°F (107.25°C). Pour the oil over the flakes and stir in the sesame oil. Let cool for at least an hour on the counter, then strain to remove the chilli flakes.
Place strained oil in a sealable jar, such as a small canning jar. Use in recipes as directed, or as a finishing oil to add heat and zip to dishes.

The oil will last for about one month in the refrigerator.
* Canola oil has a smoking point of about 470°F (243°C). Our required temperature is well below that.
………………………………….
If you like this post retweet it using the link at top right, or share using any of the links below.
Questions? Comments? Derogatory remarks?
Posted by Docaitta at 8:10 PM