Election 2011: The Writ will soon be dropped.

Fasten your seat belts. It’s going to be a bumpy night. – Bette Davis in the role of Margo Channing, All About Eve 1950 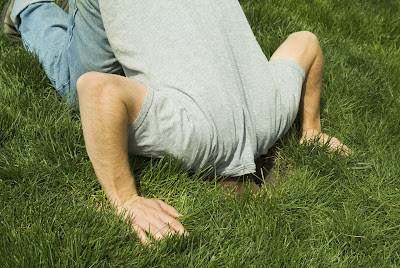 Don’t let this be your reaction. Please...
The minority Conservative government of Stephen Harper will soon be is no more. A vote of non-confidence will pass in the Canadian House of Commons before the end of today, unless something extraordinary comes to pass.
Steven Harper will be making a trip, most likely on Saturday, to Rideau Hall to visit Governor General David Johnston. He will advise the Governor General that parliament, by majority vote, has lost confidence in the government and said government must be dissolved and an election held.
That means the future of Canada is in my hands. And your hands. And the hands of the person sitting next to you. It is up to us to express our will as to who will guide our ship of state.
I will not pontificate in this post (can’t promise for the future) as to how I think you should vote. But I WILL pontificate on two of the words: think and vote. I don’t care who you vote for, just as long as you go to the polling station on election day and do your democratic responsibility.
Your vote matters. It really, really does. I may agree (or disagree) with policies or actions of any or all the federal parties. But I will listen to the arguments and proposals about to flood our lives, and decide based on thought, not "who I always voted for" or "how my parents always voted." But believe me, I will vote.
You need to as well. The percentage of eligible Canadian voters actually casting ballots has steadily declined over the last two decades. 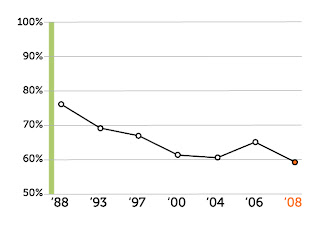 At a dismal 59.1% voter turnout, that means over 4 out of every 10 Canadians had no say in the governing of their country for the last 3 years. That’s atrocious.
In addition to overall voter apathy, another trend is the frighteningly low rate of youth voting. Only 25% of eligible voters aged 18-24 voted in the 2000 federal election. Studies also show a trend that if you don’t vote when young, you most likely won't vote when you get older.
What are we, sheep? If you disagree with a government, you change it one of two ways: revolution (which I do not suggest) or voting in candidates who reflect YOUR ideas. The electing of those who govern our country is the responsibility of every Canadian. It should be a moral imperative to us all.
When candidates or their minions come to your door, GRILL them on the issues. Ask them about their record. Ask them about their party’s positions on YOUR concerns. If they don’t have a position, or you disagree with them, support a party that does. Perhaps you will even inspire an opinion from them. Look no further than the quickly adopted party positions on internet Usage Caps to see what a united "WE" can do.
Let’s be honest. It’s not like you’re either voting for a dictatorship or communism. Believe me, all parties will be cast in that light over the next month. Doom and gloom will be prophesied from all sides in efforts to paint their opponents in the worst possible light.
In Canada, the political parties are all crowded into the centre. Some are a more right, some more left — but all more or less in the centre. The present Conservative government certainly has its issues. The last Liberal government definitely had theirs. We lived through them both.
But now it’s your turn to be judge, jury and executioner. It’s up to every eligible Canadian of voting age to do their duty. It’s a terrible burden. First you have to weight the issues agains your concerns, then decide who to support, and then—horror of horrors—take about half hour of your life to cast a ballot. That probably includes your walking time to the polling station and back home. Think of all that we have because of our democracy. Support it as it supports you.
So who can vote in a Canadian federal election?
Voting on Election Day
To vote in a Canadian federal election you must be a Canadian citizen and be 18 or older on election day. You should be on the voters list to vote. It’s more difficult, but not impossible, to get on it at your polling station on election day.
Voting in Advance Polls
If you are not able to vote on election day, you can vote in the advance polls. Locations and times of advance polls appear on the Voter Information Cards that Elections Canada mails to all registered electors once a federal election has been called.
Voting by Special Ballot
Eligible voters who do not wish to vote at their polling station, or cannot get to a regular polling station on election day or during the advance polls, can vote by mail, or in person at the office of the returning officer, using a Special Ballot.
To use a Special Ballot, you must have a Canadian address for electoral purposes and your vote will be counted for that riding. It is important to apply for a Special Ballot as soon as possible. Elections Canada will process your application, then send you a voting kit, which must be completed and received back by Elections Canada by 6 p.m. EST on election day. You can get an application form by calling Elections Canada at 1-800-INFO-VOTE (1-800-463-6868), from your riding returning officer, or from the nearest embassy or consulate.
How long is a federal election campaign?
The length of federal election campaigns vary, but under the Elections Act the minimum length of a campaign is 36 days.
If you know someone who plans not to vote, encourage them to change their mind. If you know someone who may need help getting out to vote, help them. We’re Canadians, people. Make YOUR voice heard.
The up side of all of this? At least we will only have to put up with the political posturing and idiotic messaging for only a month.
As Winston Churchill said: “It has been said that democracy is the worst form of government, except all the others that have been tried.”
………………………………….
If you like this post retweet it using the link at top right, or share using any of the links below.
Questions? Comments? Derogatory remarks?
Posted by Docaitta at 11:35 AM