I hasten to laugh at everything, for fear of being obliged to weep. – Pierre Beaumarchais

I had every intention of posting about how great and easy it is to make your own soy milk. It's funny how things change. I don't know wether to laugh or cry.

Soy milk is a product I never quite like from the grocery store. Tofu is a different story, but soy milk, not so much. It always tastes “funny” to me. That has now changed, with this recipe, maybe. Why? Read on.

Soy milk is disgustingly cheap to make. Cents, actually – for 2 L. I bought a cup of soybeans at the Bulk Barn for well under $1. On the face of it, soy seems good for you because it contains a lot of protein and plant-based fats.

Soy used to be the poster child of the health movement. Soy products are everywhere now and we’re all told we should eat more vegetable protein than animal. But what do we know about them, like how they got from “there” to “here,” or other essential facts? I would venture not very much.

From what I’ve learned I may very well be turned off again, not by the taste but by the controversy. 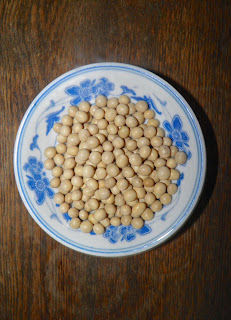 A little about soybeans
As you can probably surmise, soybeans were first cultivated in China. This was supposedly some time between 1600-1000 BC.

From China they slowly spread into other Asian countries via trade, reaching as far as India. All these countries made good, and creative, use of them as food.

But in Asia they pretty much stayed, until about 1880 when they were planted as livestock forage in North Carolina. Soybeans actually had arrived 80 years earlier – as ballast in ships – but were never planted.

A few decades afterward, the US Department of Agriculture started to study them more closely as a viable option for wider livestock forage. Shortly thereafter it was discovered they were an excellent rotational crop, improving the yield of the “food” crops planted afterward.

Today over half of the world’s soybean production is in the USA. Other leading producers are Argentina, Brazil, China and India. Brazil will soon overtake the US’s position, probably in the next decade.

Soybeans show up in the most unlikely places. They are used in well over half of the processed products in supermarkets. So you’re eating soy whether you like it or not.

Genetically modified (GM) soybeans
Soybean is one of the crops genetically modified by large multinational seed corporations. Although the consumption of GM soy is not supposed to be any worse than non-GM, that may or may not be the case. Around 90% of soybeans grown in the USA are GM. Approximately 70% of soy products in grocery stores are from GM crops.

GM soybeans were initially created to be resistant to Round-Up (glyphosate) herbicide. That means farmers can spray their entire fields with it, kill everything and the soybeans are unaffected. Buy where does it go? It’s in the ground. Just because it doesn’t kill the soy doesn’t mean it’s not taken into the plant.

A recent study by Italian researchers examined the toxicity of four common glyphosate-based herbicides on human placental, kidney, embryonic and umbilical cord cells. They found total cell death within 24 hours in all cases.

But that’s not all that’s bad about GMs, of any kind. Growing GMs are regulated, usually meaning a farmer can’t grow anything BUT GMs on their farm. So they are tied to multinational companies for their seed, and in-species diversity is substantially curtailed.

GMs also have a nasty habit of finding their way into non-GM plant populations and either cross-breeding or overtaking the natural varieties, doing unknown damage.

So what do you do? One step is to find out what foods you are purchasing have GM ingredients and stop buying them. It may be very difficult, but genetically modified organisms (GMOs) are only there for profit. The "end world hunger" rationale behind GMOs has not materialized.

Here's the crux of capitalism: if they can’t sell one product, they’ll switch to something they can. Neither Canada nor the USA requires any safety testing on GM food products. Some European countries have, or are considering, outright bans on GMOs. Even some African countries are following suit.

“Healthy” soy
It makes a difference if soy in products is fermented or not, too.

According to an article in The Guardian newspaper (UK), researchers concluded that consuming unfermented soy may be linked to reduced male fertility, increased cancer risk, damaged brain function, developmental abnormalities in infants, and early onset of puberty.

Fermented soy products, on the other hand, are better, in moderation. These include miso, tempeh, natto and tamari sauce. The fermentation process removes the phytates, trypsin inhibitors and heaglutinin.

Not quite so rosy a picture, eh?

Sadly I am almost certain, from the statistics above, that my bag of soybeans were GM. Some other common GM products in Canada include corn, beets and canola. Apples, wheat and potatoes are in approval stages. They're everywhere.

A great idea is to purchase as much food as you can from local small farmers who are not tied to GM seed. That not only benefits you, but your local economy as well. Soy beans will NOT be one of those products you can find.

If you still want to make some, here’s the recipe for your own homemade milk. (Did I say it tasted really good...?)

Soak the beans in the water overnight. By morning they will have tripled in size.

In the morning purée the beans, in two batches, as smoothly as you can in a food processor. They will become almost the consistency of whipped cream.

Ladle the mixture into a fine cloth bag (like a jelly bag) and squeeze out as much moisture as you can into a large measuring cup (a 2L one).

Take the solids (called okara) re-mix with more water, purée again and squeeze again. Keep the okara for another use if you wish. (Google for recipes.)

Place the soy milk (more like “froth”) in a large stock pot, bring to a boil and reduce the heat to slightly more than simmer.

Cook the milk for between 5-10 minutes, stirring constantly.

Remove from the heat and stir in the honey, vanilla and salt.

Place in a 2L jar, topping up the milk with more water to make 2L. Refrigerate.