I have just three things to teach: simplicity, patience, compassion. These three are your greatest treasures. – Lao Tzu

Words to live by. Sometimes simplicity can bring you the greatest of joys. I’m learning that (sometimes the hard way) in our move to the country.

At the risk of repeating myself, one of the main reasons for us to move to the country was to reduce our expenditures and live a little bit more sustainably.

Many of us are doing it. In our case it was to move back to the village where I grew up and sort of reset the “start” button. It’s taking time, which I knew it would, but I’m hopeful, if not always confident.

There’s an old Chinese proverb that states “Cheap turns out expensive.” It was cheap to move to the home we were to inherit, and it made sense, but last week’s expense was the news that we needed a new well. At about $8,000. And then we'll almost certainly have to treat it. We have a lot of manganese and iron here. Hmmm.

We had a dug well on the property but it seems the two of us – even though we don’t use a lot of water – taxed it beyond its capabilities. You can’t live without water. So in a drilled one will go at the end of this week, hopefully. It sucks not having water, believe me.

I’d better start digging up some more design clients to offset the expense of this well. Even though we had a financial cushion when we moved we don’t want to deplete it. Cushions tend to go flat if you sit on them too much. 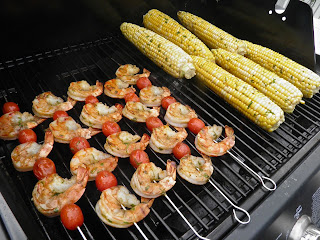 My problem (in my past life PR would have called it an “opportunity”) is in locating these clients. I’ve been away from the area so long I’m not sure who to reach out to. I have to put a real push on this coming month. It’s a little disconcerting to have very little money coming in. I guess that’s where patience comes in.

I’m not complaining, really. It’s sort of nice to have down time after 23 years, but some work would be a good thing. But I believe we’ll be safe and comfortable if I/we think and act smart. There’s a lot most of us want, but don’t need. The trick is to make sure you’re still happy as you live a simpler life.

Luckily one of the ways that we can impact our lives is by growing some of our own food. We put in our first garden this spring and it is humming along. I have more beans to pick – possibly the last – and peas to shell. Carrots, onions and beets are swelling in the ground and tomatoes (cherry, heirloom, pink, yellow, Roma) are ripening on the vine.

Don’t get me started on the cucumbers. If all the blossoms bear fruit we’re in for a pickle-making session like you won’t believe. And that’s only from a few plants.

Even our corn is starting to rocket up. It’s not as “high as an elephant’s eye” but hopefully it will continue to grow clear up to the sky. Local corn harvesting comes later in the season. For now we have to be content with imports. It’s not even available at farmers markets yet. 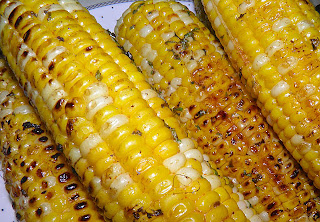 Simplicity comes in food form as well. Food should always be a joy and doesn't have to be complex. I don’t quite understand people that think preparing to eat is a chore. Sometimes a little time consuming, yes, but a chore, never. And delicious – always. Or at least it should be.

Food should be a pleasure, not only for the palate but also in the preparation. And simplicity has its place. Like in this extremely simple butter to be brushed on as you barbecue.

If you’ve never made “compound butter” you’ll be amazed at how easy it is to make and how much flavour it can deliver. In truth this is the first time I’ve physically used one on the barbecue. The smokiness of grilling really complimented the Latin flavours of the butter baste.

By now we’ve all seen corn grilled on the barbecue in its husk, but you can go old-school and strip it off. It certainly hurries the process along. In fact it cuts the BBQ time in half. But you have to tend it like a baby in bath water. As soon as it starts to brown on one side, turn it.

Since you’re already standing over the open barbecue you may as well cook something else that needs vigilance – shrimp. They take nearly the same amount of time as the corn.

Compound butter bastes are a great way to introduce a lot of flavour, and pleasure, with very little effort. If you grow some of your own food that's just the icing on the cake. 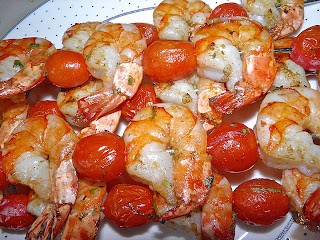 Husk the corn and set aside. Peel the shrimp and skewer, spacing them with cherry tomatoes. Set aside on a plate. Mash together the softened butter, cilantro, lime and cayenne in a small bowl.

Heat the barbecue on medium low with the cover down. While the barbecue is heating, place the butter on the top rack to melt. As soon as it liquifies remove it. Then remove the top rack. You’ll need the space.

Place the corn on the barbecue and baste with the butter. While the corn starts to cook baste both sides of the shrimp skewers while still on the plate.

As soon as the corn starts to brown on one side, turn it, baste again and then add the shrimp skewers.

Keep checking both. You’ll notice the corn brightens in colour. Turn the corn to brown the top, bottom and sides. Flip the shrimp as soon as they are cooked on one side. Baste as you go.

The whole process should take no more that 15 minutes.

The amount of butter will do for 8 ears and 1 lb of shrimp. If you want some dipping butter for the table you may want to make a little more – maybe double.

Questions? Comments? Derogatory remarks? Just ask! I’ll answer quickly and as best as I can. If you like this post feel free to share it. If you repost, please give me credit and a link back to this site.
Posted by Docaitta at 9:25 AM