You know an odd feeling? Sitting on the toilet eating a chocolate candy bar. – George Carlin 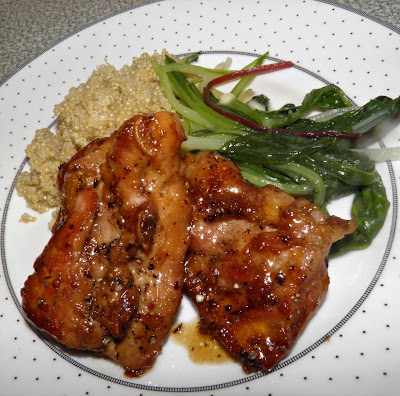 Toilet humour. How much lower can I go? Anyone who knows me will know the truth. Quite a bit further. Amazingly, stunningly, jaw droppingly further.

Here’s recipe for ribs that is amazingly stunning for two reasons, or three if you count taste. Two of them are a bit odd. Hopefully good taste isn’t an odd occurrence in my cooking!

The first reason is that they are quick. Really quick. From refrigerator to table is no more than about 20 minutes. For ribs, that’s fast. Traditional ribs are at their best simmered first in an acid like pineapple or apple juice. Then the grilling may only take 10-15 minutes, but the simmering can take up to an hour.

The second reason is that these ribs see neither barbecue nor oven. They were completely made in a cast iron frying pan on the stovetop. That means you can have them in the middle of a monsoon or a blizzard.

The third amazing thing is that they are delicious. For just a few ingredients these really pack a lot of flavour. I will be making them again. For sure.

The secret to these ribs is braising them in beer and brown sugar. As the beer evaporates it steams the ribs, much like pre-boiling, and once reduced, acts with the sugar to make a glaze.

A few more ingredients (pepper, thyme and garlic) and Robert’s your father’s brother (Bob’s your uncle).

I would be proud to serve these at my tavern, if I ran one.

What are tavern ribs?
First off, they’re pork. Other than that I can find no references to what “tavern ribs” are. We picked them up at a market outside Bridgewater.

They were called that on the package, so maybe they’re a special South Shore cut. What I do know is they were quite meaty, and the bone inside was sort of flat rather than round. Kind of like rib “ends,” maybe.

For the life of me they reminded me of what you get when you order garlic beef ribs at a Chinese take out. They're that meaty. But the bone is different and these are pork.

They’re probably cheap and easy to come by for tavern cooks. Regardless, they were good. Great even, or maybe I was just hungry...

We served quinoa cooked with half beer/half water and the first harvest of Swiss chard from the garden as accompaniments. That garden is really starting to pay off. Now if I can only remember that I have fresh herbs out there.

Yes, I know adding gluten (in the form of beer) to the quinoa sort of defeats its purpose. Too bad. Suck it up. It tasted good.

Sauté the garlic and pepper in the oil until fragrant.

Add the ribs and cook until browned. Then add the beer, brown sugar, thyme and sprinkle the ribs with salt.

Cover lightly with foil and cook on medium heat for 5 minutes. Then remove the foil, turn heat to medium high and let cook until the beer has evaporated to the consistency of a glaze. Turn the ribs often as the sauce reduces.

Do the last bit over low heat. Don’t let the sauce burn.

Questions? Comments? Derogatory remarks? Just ask! I’ll answer quickly and as best as I can. If you like this post feel free to share it. If you repost, please give me credit and a link back to this site.
Posted by Docaitta at 6:48 AM