What medicines do not heal, the lance will; what the lance does not heal, fire will. – Hippocrates 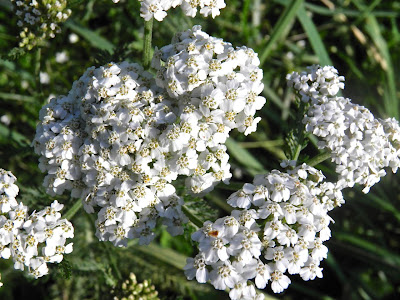 It’s been a long time since I’ve done a forage posting. You would think living in the country I would pay more attention to the topic.

I guess our main preoccupation has been the garden. Interestingly, this useful wild plant has decided to grow right behind where we planted our vegetables. That’s how I saw it. I was looking at the garden.

I suppose it’s not really that interesting. Yarrow grows pretty much anywhere. Usually where you don’t want it... 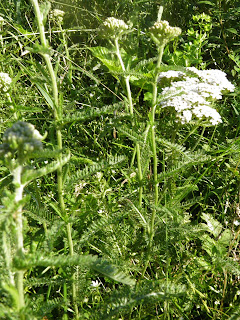 What is yarrow?
Achillea millefolium is a flowering herb in the Aster family. It is native to northern temperate regions of Asia, Europe, and North America.

It blooms June through July in Nova Scotia and reaches heights of around 24”. It grows as single stalks with feathery leaves and white flat umbrels of small flowers. It’s not fussy as to soil conditions and is common on dry land as it is in ditches or fields.

In Ancient Greece, yarrow was known as militaris, for its use in stanching the flow of blood from battle wounds. The modern name is linked to Achilles, who is said to have treated the wounds of his soldiers with this plant.

Yarrow is also sold in garden centres as an ornamental plant in white, strong yellow, orange and pink. The wild form appears here as white, yellow and very light pink. White is by far the most common. 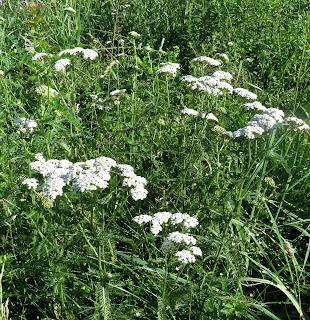 Yarrow as food
Yarrow was very popular as a vegetable in the 17th century. The younger leaves were cooked like spinach, used in soup or dried and used as a herb. A book I own called “Edible and Medicinal Plants of Canada” says it’s not very good tasting. So go figure.

In the Middle Ages, yarrow was part of an herbal mixture known as “gruit,” used for bittering and flavouring beer before the common use of hops. In areas of Sweden I understand it is still used that way. It has also been used to flavour spirits and liqueurs.

Dangers
Like almost everything, yarrow does come with some risks.

Although relatively rare, some people experience skin reactions when exposed to yarrow. If you’re allergic to other members of the aster family you may want to steer clear of it.

Yarrow is also not to be ingested by pregnant women or those breastfeeding as not enough is known about possible side effects of transmission.

Prolonged use of yarrow may also cause light sensitivity in some people.

If you can get past the fears, you may want to try this simple recipe for a salve for minor cuts and abrasions.

This salve is antibacterial, analgesic, and anti-styptic. It is effective for use on cuts, abrasions, and slight burns. Because of its antibacterial properties it reduces the chance of infection, and its analgesic properties helps reduce pain.

Of course if you have a gaping wound, get to the doctor!

Pick about 2 L of white yarrow leaves and blossoms. Place in the shade and allow to dry. Drying herbs in the sun degrades the chemical compounds that are useful. The dried flowers and leaves can be kept for months if fully dry.

Place the olive oil and beeswax in a stock pot on the stove and heat gently until the beeswax has melted.

Immerse as much of the dried yarrow as you can in the warm oil. Allow to simmer for 15 minutes. Do not let the mixture get too hot as the yarrow will fry.

Let the mixture cool slightly and then strain through a very fine sieve or cotton cloth. Place in small jars and mark with the name and date. Refrigerate for up to 1 year.

Questions? Comments? Derogatory remarks? Just ask! I’ll answer quickly and as best as I can. If you like this post feel free to share it. If you repost, please give me credit and a link back to this site.
Posted by Docaitta at 10:36 AM