Get your mojo on with Mojo di cilantro

Rock in the mainstream culture has lost a lot of its mojo. – Billy Corgan 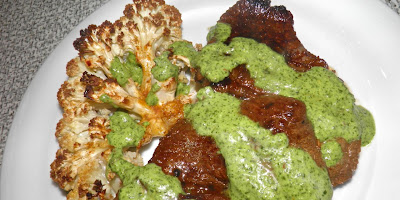 I’ve written about  this phenomenon before. When you purchase fresh cilantro at the grocery you have to buy a massive bunch of it. It’s a shame when most recipes only call for 1/4 cup or so, or as a garnish.

So what do you do with all that leftover green? Luckily there are options.

One really good way is to actually buy enough to make cilantro pesto. It’s almost, if not as good, as basil pesto and can be used in the same way. It’s especially tasty tossed with pasta and just-cooked-through shrimp. 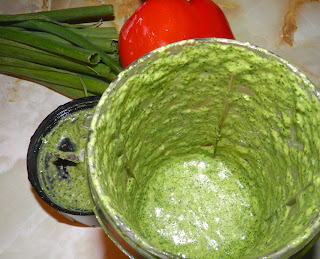 Here’s another option for you. How about a livid green sauce than can go on steak and/or vegetables? It really gives them a kick.

This recipe is close kin to pesto. Really the only thing that’s missing is the nuts, and there is an addition of acid. In my case I used lime. This also helps preserve that wonderful colour.

I found on a Spanish site that it is also excellent on potatoes, polenta, fish and even as a dipping sauce for bread. Sounds pretty versatile to me. Especially when it’s made from an ingredient that we’re “forced” to buy too much of.

Mojo is a Spanish word for a variety of slightly acidic sauces that are served cold. Not quite sure what that may have to do with Austin Powers’ “mojo”... I have read that the term was also used at the turn of the 1900s to mean a Caribbean voodoo power that gave men power over women.

Apparently the sauces are common in the Canary Islands off the tip of Northwest Africa. It is from the Portuguese word molho (meaning sauce). So that would explain how the term came from the tip of Africa, Portugal and Spain to the Caribbean. The slave trade.

No idea when it mutated from meaning sauce to the ability to get “lucky.” So now you know far too much about the word mojo. Stun and amaze people at cocktail parties with your newfound knowledge.

Get your mojo on talking about mojo.

I tried growing cilantro this year but didn’t meet with too much success. I had it in a cast-iron planter. I’m not sure if it was a case of too much iron, or not enough water, or what, but it failed miserably.

I have had much better success in the garden with curly parsley and Italian parsley so next year we’ll try it there. Then I’ll really have too much cilantro!

Just below is the recipe for the mojo. I’m also tag-teaming it with a really great steak marinade. We served the sauce with the steak and slabs of roasted cauliflower. A fantastic meal. 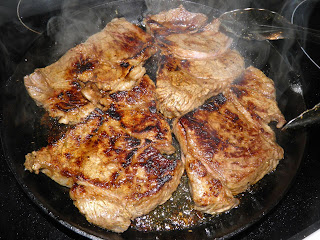 Combine all ingredients, except for the olive oil, in a food processor or blender. Pulse until ground into a purée. Scrape down the sides a few times.

With the motor running, slowly add the olive oil. Start with 1/2 cup. If you desire a thinner sauce, add the additional 1/4 cup.

Make this sauce within an hour of using. If made hours ahead the cilantro may discolour. 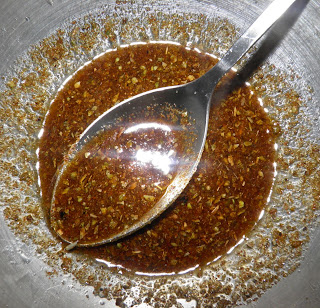 Combine the marinade ingredients. Coat the steaks well and then let them marinate for 1 hour on the counter. Shake off the excess and then grill or pan fry in 1 tbsp of oil.

Questions? Comments? Derogatory remarks? Just ask! I’ll answer quickly and as best as I can. If you like this post feel free to share it. If you repost, please give me credit and a link back to this site.
Posted by Docaitta at 9:38 AM