I'll come and make love to you at five o'clock. If I'm late start without me. – Tallulah Bankhead

Just a quick note: The kitchen gets totally packed up tonight so you'll have to bear with me for a few days until we're in our new home. Then it will be full speed ahead! In the meantime...

Be thankful for my brevity. I don’t have much time to write. It seems like this day has been composed of delays and rushes. Having about half a kitchen that isn't packed sucks the big wazoo as well. 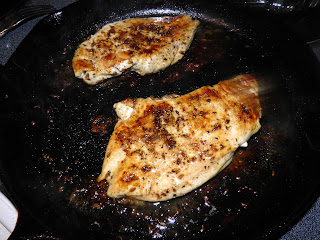 That’s a pity, because this is a really good chicken breast “burger.” And they take hardly any time to make.

I was running late last night and didn’t get to the grocery store until 7pm. I usually get there around noon. No such luck yesterday.

So I was on a mission. By the time I got to the store I had a craving. I think I smelled someone cooking chicken on the walk to the store. It got into my head somehow..

Regardless, chicken it was by the time I arrived. That’s dangerous – especially when shopping for boneless, skinless chicken breast. If it's not on sale you nearly need to take out a second mortgage to buy some.

But I was committed (or committable). You do have to pound them flat, but doing so makes two "patties" per breast. Flattened chicken breasts cook quickly and are relatively healthy. But what to put with them?

First thing I spy when I go into the grocery? Avocados – on sale. Then bacon, lettuce, sweet onion...I quickly picked up enough ingredients to make chicken breast burgers with a definite Tex-Mex slant.

I don’t give a hoot about cooking the chicken in the bacon fat. Get over it. Remember: everything in moderation – including moderation. These would be equally as good grilled or barbecues, of you really can't get your head around the bacon fat. 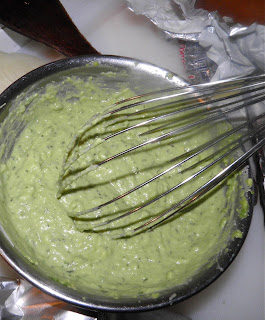 Round everything off with some appropriate spices and you’re good to go. If you don’t like spicy chicken breast leave out the cayenne. (But you really should put it in. The avocado mayonnaise moderates it all.)

Did I say these were good? They’re definitely going to be back for a second engagement. And third.

Fry the bacon until crisp. Remove to a dish.

While the bacon is frying, place each breast individually between a folded piece of plastic wrap. Pound until quite thin, about 1 cm thick.

Two at a time, fry the breasts in the bacon fat. Season with the cumin, cayenne, salt and pepper. Let cook on both sides until browned and done through. Let rest 2-3 minutes. Cut each breast in half, to make 8 pieces of chicken.

Whip the avocado, mayonnaise and cilantro in a small bowl until smooth. Slice the onion.

To assemble, place two pieces of lettuce on the bottom half of a bun. Place the chicken on top, followed by bacon and onion. Add some of the avocado mayonnaise and the top half of the bun. 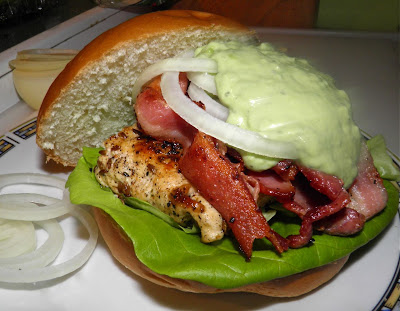 Questions? Comments? Derogatory remarks? Just ask! I’ll answer as best I can. If you like this post feel free to share it using any of the links. If you repost, please give me credit and a link back to this site.
Posted by Docaitta at 6:30 AM