Beware of him that is slow to anger; for when it is long coming, it is the stronger when it comes, and the longer kept. Abused patience turns to fury. – Francis Quarles

I'm kind of slow to anger, and can attest to the truth of that statement. I take a lot, but when I've reached my limit – watch out. But slow to anger has nothing to do with slow to cook, although both can run to a pretty good temperature...

I'm not writing about “slow food” as the trendy definition implies. This post is nowhere near that complicated or environmentally "preachy" (although I do believe strongly in the values of the Slow Food Movement). 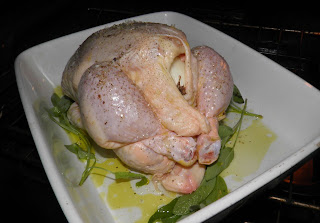 This recipe is about the actual definition of “slow” – by which I mean this recipe takes an afternoon to make. All of it. From 1 pm to 5 pm.

Sometimes when you have the time, it’s fun to set something on the fire and let it go. This is especially true if it’s the kind of cooking that doesn’t take constant tending.

That’s this recipe. Put everything in a roaster and forget it for 4 hours. Yes, that’s right. 4 hours.

And the chicken you get in the end is amazingly tender and juicy. The only thing you’re missing is a browned skin, But I’ll take succulent meat over crispy yet dry any day. Call me crazy...

I bet you didn’t realize you could use your oven as a slow cooker. The tabletop slow cooker is merely a convenience item from 40 years ago.

A little about “slow cooking”
For as long as humans have been using fire slow cooking has been recognized as a method to tenderize less desirable cuts of meat. There was a time not all that long ago when eating “nose-to-tail” (all of an animal) was a financial requirement so tougher cuts came with the territory.

Tough cuts of meat especially benefit from long, slow cooking. The ligaments and collagen often found in them breaks down making them much more palatable and the juices self-baste the meat as it cooks.

As our modern mechanization of produce increased and society sped up, time to spend in the kitchen was no longer there. With both partners working the requirement for fast meals became the norm, as opposed to the exception (sadly).

But the desire to have a slow cooked meal on the table was still part of our remembered culture. So in the 1970s, Rival Company marketed a low temperature cooker with a removable crock (ceramic) liner that was sort of shaped like a pot. Crock. Pot. Crock Pot.

I was given one and in preparing to sell the house I have yet to find it. I must have really stowed it far back in some storage space. I was always a little “ashamed” to have one.

I don’t know why. I guess because it’s effortless to use it. Cooking to me should take some effort. I feel it shows your love for those who eat what you make. I guess I should re-examine my priorities. What’s the difference between a 3’x3’ slow cooker and one that fits on your counter? I would hazard a guess that’s it really not too much.

Maybe my aversion has something to do with the over-hyped marketing of the “time saving device” from the 1970s. I have the same aversion to fondue pots and Chalet-style architecture. Trends from the same time period…hmmm.

Now I know that, on the whole, chicken isn’t considered a tough cut of meat, but even a fresh young bird can benefit from some long, slow, lovin’ from the oven. And if we look not too far back in the past (like before the chicken we purchase were factory raised) a chicken could actually live for a few years, which would make it a candidate for slow cooking. (Are you familiar with the saying "tough, old bird"? That's why.)

Try this recipe. You can even put it on the oven and then go about your day. It’s amazingly fall-off-the-bone tender. But you do have to use the oven… Don’t stuff a whole chicken in a crock pot.

Place about 2 tablespoons of olive oil in a 10x13 (or similar sized) roaster. Put 3 of the sprigs of sage in the oil.

Shove a whole head of garlic, the remaining two sprigs of sage and an onion up inside the chicken. Tie the legs together so the onion and all won’t come out during roasting.

Roast for 4 hours. Check at 3 hours. The internal temperature needs to read 180°F on a meat thermometer. Roasting time will vary depending on the size of the chicken.

If you like this post retweet it using the link at top right, or share it using any of the links below. Questions? Comments? Derogatory remarks?
Posted by Docaitta at 9:27 AM