We ourselves feel that what we are doing is just a drop in the ocean. But the ocean would be less because of that missing drop. – Mother Teresa

I don’t usually start off with a warning but this time I will. I have found many, many sources that cite historical uses of beach peas as a food source. I have also found the seeds of beach peas (grouped in the family of garden “sweet peas”) contain a toxic amino-acid.

This amino acid—in large quantities—can cause a very serious disease of the nervous system known as Lathyrism. I would assume it is present in all members of the genus Lathyrus because the condition’s name is so like the plant name.

The seed is said to be perfectly safe and very nutritious in small quantities, but should not comprise more than 30% of the diet. So as another blogger wrote, if you’re marooned on a desert island watch out how much you eat.

If you’ve been to a beach in the northern hemisphere anywhere in the world you’ve most likely seen this. Beach pea is a perennial coastal plant that grows in the sand dunes and gravelly areas of beaches.

The species that grows here is “var. maritimus.” There are many others that appear worldwide.

Beach pea looks very much like either vegetable peas and/or garden sweet peas except “hardier.” By that I mean tougher looking, I assume to stand up to coastal conditions. It is hardy to USDA Zone 3. That’s pretty hardy.

Bech peas can reach about 2 feet in length. The leaves are oval, arranged in pairs and terminate with a tendril. The flower is a raceme with 5-12 blue-violet flowers.

If you’ve ever seen a sweet pea (or vegetable pea) you know what they look like. Flowers appear in July through September in Nova Scotia.

The fruit is a typical legume, with 2 halves that split open  but remain hinged at the base. Inside you will find pea seeds arranged in a row. They are quite tiny in relation to vegetable peas.

The seeds ripen from late July through to October. If you want to eat the peas you have to pick earlier (when they’re immature) rather than later as they toughen as they mature. If you want to grow it in your garden, you have to let the seeds fully mature.

Beach peas are pollinated by bees and butterflies. The plants help in fixing nitrogen in the coastal soil. In Canada beach pea can be found in British Columbia and from Manitoba to Newfoundland.

Beach peas can be successfully grown in the garden in well drained soil and full sun. They cannot tolerate shade.

Here’s uses I found for beach pea. Remember the warning at the top of the post...

The immature peas themselves can be cooked like garden peas. The mature seeds can be sprouted and eaten. The pods can be stir-fried whole and the tendrils can be harvested as a “gourmet” treat. Pea tendrils are quite a fad right now in many gourmet food magazines. They are often tossed in with salads.

You can also eat the plants when young, either raw or cooked. The mature dried seeds can be roasted for a coffee substitute. With the price of coffee now I may be trying that one...

The Chinese used beach peas as a tonic for the urinary organs and intestinal tract. Iroquois treated rheumatism with cooked whole young plant. Of course, never try to treat yourself with wild edibles.

So if you can get past the fear of lathyrism it may be well worth a nibble the next time you go to the beach. Just for fun...

I certainly wouldn’t want to have to shell enough of these small green darlings for a meal. So poisoning my family is almost certainly not going to happen – at least not by beach peas... 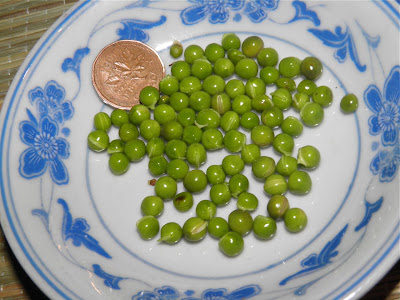 If you like this post retweet it using the link at top right, or share it using any of the links below. Questions? Comments? Derogatory remarks?
Posted by Docaitta at 7:02 AM