Don't smother each other. No one can grow in the shade. – Leo F. Buscaglia

This is another country recipe that I had all but forgotten about until my mother made it for me a few weeks ago.

It's called "smother." I have no real idea why it's named so, unless it's because the poor beef is smothered in gravy. It's a very old way of cooking beef, at least in Nova Scotia.

If you look online you get all kinds of smother recipes with all kinds of ingredients. Apparently smother in some parts of the southern USA is potatoes and onions, very similar to what we would call potato "hash." 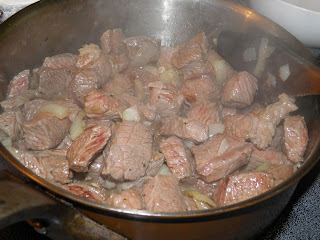 There are also smothered beef liver recipes (sort of like this recipe), smothered pork, and an interesting sounding green chilli chicken smother that I may actually have to try.

But this recipe is for good old-fashioned Nova Scotia Smother: beef browned with onions and then "smothered" and simmered in gravy.

We used to have this fairly regularly when I was growing up. It was a great way to turn a less than wonderful cut of beef into a delicious meal.

This is  "stick-to-your-ribs" kind of dish – the sort of thing that is great if you've put in a full day of yard work and want something hearty. It's an autumn sort of a meal.

I have seen a Cajun beef smother recipe, so there may be some sort of link with the Acadians in the Annapolis Valley of Nova Scotia. Nearly all were forced to leave their homes in Nova Scotia during the Expulsion of 1755-1763 and many settled in the areas around Louisiana – then still a French colony. The area didn't become part of the United States until 1803.

So it could very well be an early French method of preparing poorer quality cuts of meat. Regardless it's a safe bet to say it's a "settler" recipe.

I did make some revisions. I boosted the flavour of the gravy by adding Worcestershire sauce and dijon mustard. Feel free to omit them if you wish.

Regardless of this recipe's provenance it's a great meal and worthy of putting in your culinary repertoire.

I served it with potatoes, fresh peas and new carrots, all cooked together and tossed with butter and cream!

Melt the oil or butter in a pan with a decent lid. Sauté the onion and garlic until soft. Then add the beef and cook until no longer brown on the outside.

Sprinkle the beef and onions with the flour and toss well. Let cook for about 1 minute.

Add the beef and bouillon cube and bring to a simmer. The sauce will thicken almost instantly. Add the worcestershire and mustard. Sprinkle with some cracked black pepper and salt to taste.

* You can also substitute 1 cup of beef broth for these two ingredients.

If you like this post retweet it using the link at top right, or share it using any of the links below. Questions? Comments? Derogatory remarks?
Posted by Docaitta at 7:25 AM