How to: Homemade Cola Syrup

There are now more obese people in the United States than there are overweight people. I think it's safe to say that after all these years, Diet Coke is a complete failure. – Jay Leno

Here’s something that may very well put your weekend rum and cokes on the neighbourhood map. And it’s not very difficult to pull off. Try making your own homemade cola syrup. It’s tasty.

Cola goes back to the mid-1800 when a US Civil War veteran from Atlanta, John Pemberton, created it. He came back from war addicted to morphine and his cola recipe was a way to try to  cure himself of his addiction.

The original recipe (“coca” cola) had cocaine in it (as well as a long list of other botanicals). That’s one way to "cure" an addiction, I suppose. It was originally sold by Mr. Pemberton at his pharmacy as medicine. By 1888, three versions of cola were being marketed by three different companies.

Mr. Pemberton’s company, and his recipe, was subsequently turned into what is now the Coca-Cola company.

The actual formulation is—as you can well imagine—a closely guarded secret. Supposedly two people know the exact recipe at any one time and they are not allowed to fly in the same airplane. (I have suspicion that is a charming story but nothing more.)

A radio program “This American Life” came across a 1979 article in the Atlanta Journal-Constitution that talked about the history of coca-cola and had a photo of Pemberton’s handwritten recipe.

It received little attention at the time, but this may have very well been a photo of the recipe that Pemberton used – and maybe the source of the recipe used today by Coca-Cola.

If you would like to read more and see the picture look here: http://www.thisamericanlife.org/radio-archives/episode/427/original-recipe 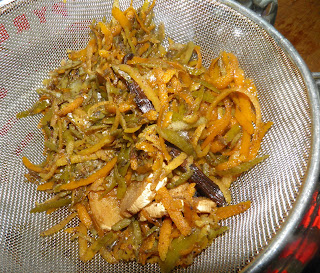 Regardless, homemade cola syrup is a wonderful thing. It has hints of vanilla, with spice, citrus and floral accents. I bet you didn’t know that cola was so complex!

Everything is pretty easy to find except for the lavender flowers, which do make a significant contribution. I know of three sources locally in Halifax: the Seaport Farmers Market, Pete’s Frootique, and Planet Organic.

The demerara sugar is important as it imparts the dark color and some molasses flavours. Buy it at the Bulk Barn inexpensively.

Everything in the recipe is there for a reason. It seems strange, but it works.

I am currently trying to lacto-ferment/carbonate this syrup as I have been doing lately with cherries and ginger ale. With vodka already in it, no less. I’ll let you know how that turns out.

Bring all the syrup ingredients together to a boil in a pot.

Reduce the heat to low, cover and let simmer for 20 minutes.

Let the mixture sit for one hour and then strain.

Chill the resulting syrup and combine it 1part syrup to 4 parts soda water.

This really tastes like a cola. It might not be “the real thing” cola but it’s more than acceptable!

People WILL as you what their rum and coke is mixed with.

If you like this post retweet it using the link at top right, or share it using any of the links below. Questions? Comments? Derogatory remarks?
Posted by Docaitta at 7:40 AM