There are people in the world so hungry, that God cannot appear to them except in the form of bread. – Mahatma Gandhi
The quote above sort of makes my following entry rather puerile (childish and silly). We should ponder Gandhi’s words today and in the coming year. We are so fortunate and have been given so much.
But I will soldier on with my post none the less…
Have you ever made soft pretzels before? I hadn’t, but yesterday I had the time to experiment. I’m OK with making bread so I thought I would give it a go. How hard could it be?
Well, not really even as hard as it seemed so I discovered. The only thing about making them is they’re “involved.” By that I mean there’s quite a few steps.
Making the dough is a breeze – and letting it rise – but then after that they require some attention.
After raising you have to shape them, twice, and then boil to pre-cook. Egg wash and toppings follow before baking.
Don’t confuse the word “involved” with the word “difficult.” Sometime things take a little extra work. That doesn’t make it difficult. These just have a couple more steps than making a loaf of bread.
The result? Eight dinner roll sized pretzels, golden brown and tasty. If you’re hanging around at home with time between other household tasks to do I would suggest giving them a try. It actually was fun.
Plus, everyone loves a salty, soft pretzel, right? 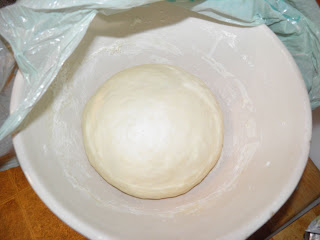 Soft Honey Pretzels
Prep: 2 hours  |  Cook: 15 min  |  8 pretzels
1-1/2 tsp yeast
1-1/2 tbsp honey
2-1/2 cups white flour
1 1 tsp salt
1 cup warm milk (110°-115°F, any hotter will kill the yeast)
1 tsp salt
1-1/2 tsp baking soda
1 egg
coarse salt
Combine all of the ingredients down to the milk in a bowl and mix together with a spoon until it forms a ragged mass. Then take your hands and bring the dough together fully. It will be fairly sticky feeling.
Transfer the dough from the bowl and knead for 5 minutes. As you knead the dough will lose its stickiness and become smooth and soft. Oil the bowl and place the dough back in it, cover the top with plastic wrap and a towel. Set in a warm place and let rise until doubled, about 1 hour.
Punch the dough down and knead twice with your palm. Cut the dough into 6 pieces and roll each piece into a log about 7” long. Let rest under a towel for 10 minutes.
After relaxing, stretch each piece with your hands to about 14-16” long. Take each piece and make a “U” shape. Then take the two ends and cross them. Pinch the crossed part together and then bring the ends back over the bowl part of the U. Press the ends down slightly to maintain the shape. Cover with a towel and let rest again for 10 minutes in a warm place.
Here's pictures of how to do it:
When the pretzels are resting, preheat the oven to 425°F. Heat a pot of water with the remaining salt and the baking soda. After it comes to a boil cook each pretzel for 6 minutes. Remove and place each one on a well greased baking sheet.
Whisk the egg and brush each pretzel. Sprinkle with coarse salt. Immediately bake in the hot oven for 20 minutes or until nicely browned.
Serve warm. These will only stay really fresh for about 8 hours. That's the problem with soft pretzels, if you can call delicious fresh bread a problem!
You can add other topping in addition to salt, such as sesame seeds, poppy sees or dried garlic and onion before baking. If you want cinnamon sugar toss the pretzels in the mixture after they’re baked.
…………………………………..
If you like this post retweet it using the link at top right, or share using any of the links below.
Questions? Comments? Derogatory remarks?
Posted by Docaitta at 12:30 PM