A man is not an orange. You can't eat the fruit and throw the peel away. – Arthur Miller
T’is the season – for discount clementines!
If you’ve been reading your local grocery flyers lately you probably have noticed that boxes of clementines are on sale. If they aren’t they soon will be.
Interest in them seems to drop off just before and after Christmas for some reason…overexposure? Currently in Halifax they’re going for $2.88/5 lbs. That’s about half the pre-sale price. Canning (or “putting up” as the old folks used to say) fruit is a fantastic way to preserve the height of the harvest for times when fruit is not so affordable.
Oranges (and clementines) have been a special Christmas treat for decades in rural Nova Scotia. Although they’re available all year round that wasn’t always the case.
During the Great Depression they were a rarity. I remember my mother telling me of the excitement generated when they arrived at the local dry goods store. They were special. The village was small so everyone knew when they arrived.
Even when I was young (decades later) I always received an orange in the toe of my Christmas stocking. I’m sure it was a hangover from those bygone days. My parents would have had vivid memories of those earlier years because that was when they were children.
What are clementines?
Clementines are a variety of mandarin orange that are small, smooth skinned and very easy to peel. They are almost always seedless, which makes them ideal candidates for canning.
The origin of the clementine is a little murky. One story says the clementine was the result of a hybrid discovered by Father Clément Rodier in the garden of his orphanage in Algeria. Some studies state that the clementine is possibly a variant of the Canton mandarin that grows in China.

Clementines are at their peak from November through January so have become known as the Christmas Orange. They are usually shipped in cardboard or wooden crates.
I suggest the 250 ml jars because I’m notorious for opening a can of fruit and then never finishing it. The smaller jars yield two small servings – just enough for my family. Of course larger jars can be used if your brood numbers in the dozens. Just increase quantities accordingly.

More detailed directions for canning foods than I outline below can be found at: http://food.unl.edu/web/preservation/canning
Grand Marnier® Clementines 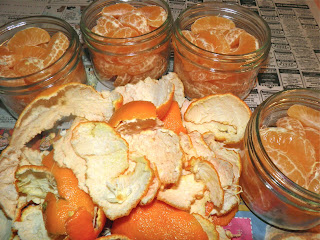 6 250 ml jars (or 3 500 ml)
18 clementines (approximately)
6 tbsp Grand Marnier® liqueur (or other orange liqueur*)
1-1/2 cups sugar
1-1/2 cups water
Wash and dry the jars, lids and rings. There is no need to sterilize the jars. The processing time raises the temperature enough to kill any bacteria that may be present.
Peel the clementines and remove as much of the white membrane as you can from the segments.
Pack the jars with the fruit segments. Depending on the size of the clementines you’ll average about 2.5 fruits per 250 ml jar.
Bring the sugar and water to a boil and cook for 5 minutes. 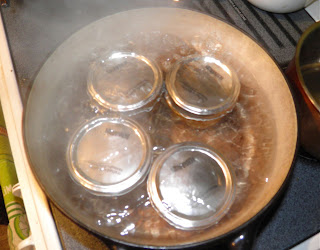 Pour 1 tbsp of liqueur in each of the jars (for 250 ml) and top with the boiling syrup. Place the covers and rings on each jar and tighten.
Place the jars in a large pot of boiling water with enough water to cover the jar tops well. Process in the boiling water for 10 minutes.
Remove and let cool until the tops pop down. Check the tightness of your jar rings.

Note: If the centres of the tops don't pop down as the jars cool they are NOT sealed. Re-process for a further 10 minutes and try again. I had two that didn't seal the first time. Second processing did the trick.
Well sealed canned clementines will last unopened on your shelf for at least 12 months.

* Triple Sec®, Cointreau® or my homemade Grand Orange liqueur can be substituted. For my liqueur recipe, click here.
…………………………………..
If you like this post retweet it using the link at top right, or share using any of the links below.
Questions? Comments? Derogatory remarks?
Posted by Docaitta at 6:17 AM