Larousse Gastronomique: the ultimate cookbook
A gourmet, defined by Merriam Webster Online is "a connoisseur of food and drink."
A gourmand, on the other hand, is "one who is excessively fond of eating and drinking."
Is there a difference?
If one had to dissect the difference I assume one is more of an "appreciator", the other a "lover", of food. I unabashedly fall into the latter category. As far as this book is concerned, it doesn't really matter, in my opinion. Just go out and buy it—now. I don't care what you're doing.
Larousse Gastronomique
This cookbook is "the" encyclopedia of gastronomy. We have an edition—purchased at a secondhand bookstore—that was published in 1963. It has prefaces by two of the gods of French cuisine, Auguste Escoffier and Philéas Gilbert. Its rust coloured cover is tattered, and the spine is weakening, but it has pride of place above any of the many other cookbooks in our collection.
The majority of its nearly 2,000 pages is  French cuisine. It is filled to bursting (as you can imagine) with recipes and techniques for absolutely everything you would ever need to know about French cookery, both simple and unbelievably ornate.
It would not be beyond belief that Julia Child, during her time at The Cordon Bleu in post-war France, had this book as a major text. As we all know, her love of French cuisine was legendary. She famously said of her first meal in Rouen that  it caused "an opening up of the soul and spirit for me." 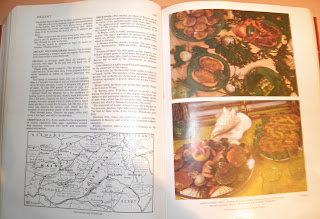 From Wikipedia: "The first edition (1938) was edited by Prosper Montagné, with prefaces by Georges Auguste Escoffier and Philéas Gilbert. Gilbert was a collaborator in the creation of this book as well as Le Guide Culinaire with Escoffier, leading to some cross-over with the two books. It caused Escoffier to note when he was asked to write the preface that he could "see with my own eyes," and "Montagné cannot hide from me the fact that he has used Le Guide as a basis for his new book, and certainly used numerous recipes." (I'm sure a fit of pique ensued shortly thereafter.)

The Encyclopædia Britannica writes of Montagné and Escoffier: "After Carême, the two men who probably had the greatest impact on French gastronomy and that of the world at large were Prosper Montagné and Georges-Auguste Escoffier. Montagné was one of the great French chefs of all time, and he achieved a secure place in gastronomic history by creating Larousse Gastronomique (1938), the basic encyclopaedia of French gastronomy. "
Again from Wikipedia, Escoffier "is a legendary figure among chefs and gourmets, and was one of the most important leaders in the development of modern French cuisine. Much of Escoffier's technique was based on that of Antoine Carême, one of the codifiers of French haute cuisine, but Escoffier's achievement was to simplify and modernize Carême's elaborate and ornate style."
Marie-Antoine Carême (1784-1833) was chef to the likes of Talleyrand, Napoléan, George IV, and James Rothschild. He is also credited with instituting the chef's hat which we are all familiar with today. It is his groundwork that constitutes much of Larousse. 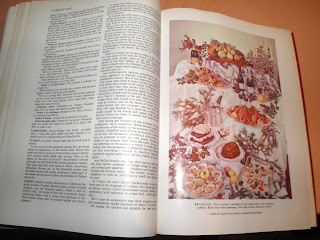 The Gastronomique was finally translated into English in 1961, two years before my copy was published.

This book, although intimidating on the surface, is full of amazing things to make. The Génoise sponge cake is a breeze, and amazing. There is a "quatre-quarts" (English Pound cake) that never fails. There are descriptions of more cheeses than you could ever eat, regions of France and their specialties, famous personalities as well as line drawings of some of the creations for which Carême was famous. It's just stunning.
In my estimation, there's only two slight drawbacks. One is that the text is in English, but the table of contents and index use all French names. But it's easily overcome. The entire book is alphabetical, so it's not arduous to find what you're looking for.
The second is that many of the more "ambitious" creations have recipes within the recipes. And you'll have an easier time of it if you're up on your essential French techniques. If not, they're in there, Im sure.
This book is such a "must have" it should be made a kitchen law. You can spend hours just leafing through in utter amazement.
You can find it quite often, as I did, second hand. This certainly isn't a critique of the contents. I'm certain it's just because any cookbook that racks in at 2,000 pages is probably slightly intimidating. But it shouldn't be. About 10 years ago I paid $20. I purchased one as a Christmas gift for my nephew and his wife two years back for $35.
Currently it is available on Amazon.com in hardcover for $68.97 CDN (regularly $110)
http://www.amazon.ca/Larousse-Gastronomique-Greatest-Culinary-Encyclopedia/dp/0609609718
...................................................
If you like this post, feel free to retweet it using the link at top right, or share it using any of the links below.
Questions? Comments? Derogatory remarks?
Posted by Docaitta at 8:35 PM