This post is from http://www.tristanstephenson.com/wordpress. It's for Dandelion & Burdock Root Soda. I have never tried it, but D&B soda is commercially available in the UK. It sounds like something fairly easy and interesting to make at home as well. Think of the satisfaction, turning annoying weeds into your own summer mixer!
Personally my main interaction with dandelions is getting a pain in my back from extracting them from the lawn; burdock is an enemy to anyone with a long haired dog. I've spent my fair share of time trying to extract burrs from both our pooches.
Burdock is a thistle introduction from the Old World. Burdock has no spines, unlike other thistles. Dandelions are an out and out curse, growing everywhere you don't want them. Both are spread extensively throughout Nova Scotia.
This following recipe may cast these two villains in an entirely different light. References online say if you like Root Beer, you'll probably like this. I'm basing my ingredients list on a variation that was posted on the original recipe. I have also switched it over from Metric to Imperial, for all of us Canadians.
As a caution, as usual, whenever you are foraging ensure without doubt you are gathering the correct materials. Wiki also lists burdock as a uterine stimulant, so perhaps those of you who are "preggers" should steer clear of this one.
Since I don't intend pregnancy in the foreseeable future, this is one I'm definitely going to try.
Homemade Dandelion & Burdock Soda
(from tristanstephenson.com)
My favourite drink as a boy was always cola, but I distinctly remember another contender which I rarely got a chance to enjoy, but when I did – it was amazing. It still surprises me how few people have actually tasted D&B as a child, for me it embodies all the sweet delight of being a young scalawag living in the countryside, as I did.
So the challenge of trying to recreate proper dandelion and burdock was presented to me the main feature being that no one actually includes the ingredients dandelion or burdock in their recipes, nowhere could I even find a description of what they taste like.
There is a story which tells of St Thomas of Aquinas who, whilst deep in prayer, was sent a message from God to go out an make a tonic/elixir from the first ingredients he encountered. St Thomas lived around the 13th century, so if the story has any truth to it, it would make Dandelion & Burdock one of the oldest soft drinks.
There is also some discussion of D&B originating from a tonic style drink used to cleanse the liver (a property of dandelion root). It is surprising how many of our best loved soft drinks are based on medicines.
So what does D&B taste like?
Well, not dandelion or burdock I can tell you! The key flavour is star anise (Star anise is a major ingredient in Chinese Five Spice Powder - D). In tasting commercially available D&B’s I kept coming across a sort of aniseed finish, which I guess is why it is so popular with children.
I also came across flavours of ginger and spice, but generally a feel of summer, hedgerows and well, fun. It also shares some similarities to root beer. In fact I would say it is kind of the English equivalent of American root beer.
The root beer thing was also the answer to my next question, which part of the plants do you use? I ultimately ended up using the roots of both plants, but the internet is not without its references to ‘dandelion leaf tea’ and other such concoctions.
The basis of "root" beer and ginger ale (the first commercially made soft drink) was fermented roots. I have chosen to use dried roots in my recipes. They are easier to control and store and also provide a highly concentrated flavour. (For directions on how to easily dry the roots, see note at bottom. - D)
So here is my (my "doctored" recipe, from metric to Imperial measure - D) recipe. As always, give it a go and see what you think, play around with it if you like, then give me some feedback.
This recipe will make a strong syrup which will then need to be watered down with 4 parts soda to 1 part syrup.
Directions for D&B Syrup
Heat 6 1/2 cups of water in a pan, when boiling add: 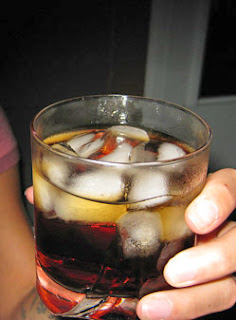 Leave to simmer for 15-20 minutes, it will smell a lot like a health food shop. Then strain through a fine piece of cotton (not cheesecloth - it's not fine enough). While liquid is still piping hot stir in 3 1/3 cups of sugar until dissolved.
If you prefer it sweeter (or less sweet) adjust the sugar. If you find the syrup a bit flavourless add more sugar, as it accentuates the essences of the roots and anise.
To use, serve with soda in a Soda 4: D&B 1 ratio.
In the summer I mix it with plenty of ice and stir through borage flowers for the ultimate English soft drink! Enjoy.
………………………………….
* Note: to dry dandelion and burdock roots, gather the roots and wash well in plenty of water. Once cleaned, roast in a 250°F oven for 1.5 to 2 hours, turning every 15 minutes or so.
Once dried, they can be ground in a coffee grinder (or mortar and pestle if you prefer).
Can be stored in plastic or glass storage containers, as long as the roots remain dry.
………………………………….
If you like this post rewet it using the link at top right, or share by using any of the links below.
Posted by Docaitta at 2:57 PM