I have drunken deep of joy, And I will taste no other wine tonight. – Percy Bysshe Shelley

Deep and joyful. That’s the flavour of eggplant-based pasta sauce. If you like the sound of that, read on.

This gave my tastebuds a little joy too. And I can imagine the occasional glass of wine with a bowl of pasta and parmesan tossed with this sauce only making it better. This is great substitution for tomato sauces and can be used in any of the usual ways.

Eggplant is an interesting thing. People either love it or hate it. I find it’s a great vegetable, not only for its deep, almost smoky, taste, but also for its mega nutrition punch.

It’s also interesting because before the Middle Ages it was unknown in the western world. There are no Greek or Roman names for eggplant.

Eggplant has been cultivated since pre-history, but it is believed to have originated in Assam or Burma in India. There are many names for it in ancient Indian languages, making it obvious that it was cultivated a very long time ago.

Somehow it made its way to China, or the other way around. The two strains developed independently, which is why Chinese eggplant are long and skinny whereas ours are dark and fat. One of the oldest records mentioning eggplant is Chinese.

It is assumed that Moors brought the eggplant to Europe via Spain, where it began its march northward.

There’s a couple strange “myths” associated with eggplant. Spaniards called them beregenas (apples of love) because of supposed properties in the romance department. I have no idea how they were using them...

At the same time some in northern Europe called them “mad apples” due to some strange idea that consumption would cause insanity. Did some poor soul on the verge eat some and then went over the edge by coincidence? 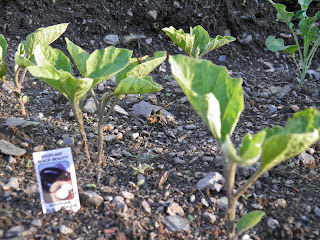 It wasn’t always a purple beast. Yellow and purple varieties were introduced into Germany from Italy in the mid 1500s. Within a century white, beige and brown varieties were also common –  including round, long, oblong and pear shaped fruits.

Today the most common is purple and pear shaped, but other sorts are making a comeback in garden centres and grocery stores. Even the growing season has been modified to accommodate our shorter growing season. Common time is 60 to 80 days.

We have some purple ones in our garden now. I have high hopes. 80 days takes us to the start of September. That’s plenty of time.

I would probably even thin this sauce (a little) with vodka or cream for a couple very interesting variations.

Give it a try. This one jar will give us three meals, I'm sure. And with very little work to make it, that’s a bonus! 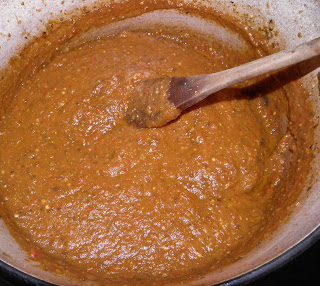 Preheat the oil in a Dutch oven or other port with a well fitting lid.

Sauté the eggplant, onion and garlic until softened. Then add the remaining ingredients. Bring to a boil. Reduce the heat to medium low, cover and let cook for 30 minutes.

At the end of the 30 minutes, uncover, turn the heat to medium and let cook until nearly dry but a little liquid remains. Purée the mixture with a blender or food processor until smooth.

Place in a clean jar, seal well and refrigerate.

Questions? Comments? Derogatory remarks? Just ask! I’ll answer quickly and as best as I can. If you like this post feel free to share it. If you repost, please give me credit and a link back to this site.
Posted by Docaitta at 7:25 AM