Heat not a furnace for your foe so hot that it do singe yourself. – William Shakespeare 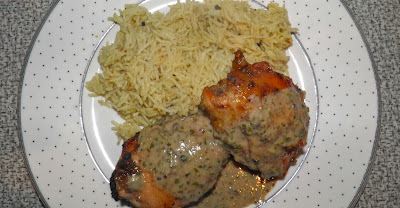 Here’s another recipe I’ve been sitting on for a little while because the weather’s been so good. Yesterday I posted about homemade hot dog buns, and sporadically I’ve been posting about plants and gardening.

For any of you who think I’m not eating, fear not. I am.

This one’s actually kind of interesting. You make a marinade, which is then used to make both a sauce as well as flavour rice for a side dish.

It sounds like quite a useful marinade, doesn’t it?

This jerk has all the usual Caribbean suspects, such as garlic, sugar, thyme, nutmeg, cinnamon and allspice. Did you know the French name for allspice is Piment de la Jamaïque (Jamaican spice)?

But I chickened out (pardon the pun) on one ingredient: Scotch Bonnet peppers. They're very common in Jerk chicken. They are also peppers to treat with respect. They are very, very hot.

I have had experience with scotch bonnet peppers in the past. I was making something (I can't remember what) and it called for sautéing scotch bonnet. They drove me out of the kitchen. Literally. Coughing and eyes watering.

So I’m a little leery of them.

If you are like me (white bread) you can substitute some peppers that have less heat. In my case jalapenos and some hot sauce.

jerk is supposed to be hot. If it isn’t, it isn’t jerk sauce. But if you’re worried about excessive spiciness you may want to do what I did.

And for goodness sakes if you use a scotch bonnet pepper DO NOT touch your eyes – or other delicate parts – after you cut it up. At least not until you have washed your hands a few times...

If you get the right balance of heat and other island flavours you will have a real Caribbean delight on your hands. It will be a recipe you keep coming back to, for certain. 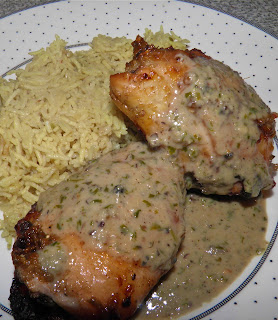 Place the chicken in a non-reactive (glass or ceramic) dish or a plastic bag.

Purée the next 16 ingredients in a food processor until fairly smooth. Pour the marinade over the chicken and let marinate for 2 hours on the counter.

Preheat the oven to 425°F. Remove the chicken and reserve the remaining marinade.

Arrange the chicken on a broiler tray. Make sure some of the marinade stays on the chicken. Bake for 30-40 minutes turning half way through, until the chicken reaches 180°F internal temperature when read with a meat thermometer.

Place 2 tablespoons of the marinade in a small stock pot and cook it until dry. Add the rice, curry, salt and water. Bring to a boil, reduce heat and let simmer, covered, for 15 minutes. Then let sit off the heat for 5 minutes.

Sauté the remaining marinade in a saucepan until dry and cooked through. Add the coconut milk and let cook until thickened to a sauce that coats the back of a spoon. Add the cilantro a minute before the sauce is finished. Taste for salt and adjust.

If you wish, purée the sauce to make it smoother.

Serve the sauce on top of the chicken, with the rice on the side. Sprinkle a little more cilantro on top if desired.

Questions? Comments? Derogatory remarks? Just ask! I’ll answer quickly and as best as I can. If you like this post feel free to share it. If you repost, please give me credit and a link back to this site.
Posted by Docaitta at 6:55 AM