Happiness is not something ready made. It comes from your own actions. – Dalai Lama 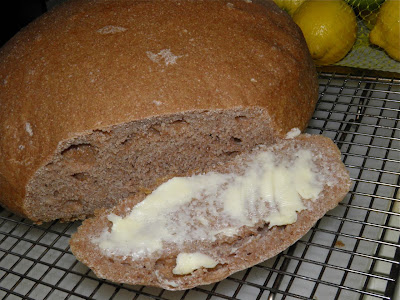 I was watching an old episode of Jacques Pépin on Netflix a few nights ago. It was his “More Fast Food My Way” series. During the 21 minutes (commercials take 9) he makes several easy and fast dishes. Those PBS cooking shows never fail to make me happy.

This particular episode he showed how to mix and bake bread right in a Dutch oven. I thought that was kind of clever. I could do that...

This is not Mr Pépin’s recipe at all. It is mine. I had bought some interesting flour a couple weeks ago at the Bulk Barn – red fife – and thought it was time to crack it open.

Red fife is prepared as a stone-milled whole wheat, which means that it has the usual endosperm that is found in white flour, but also the bran and germ. Those parts of the wheat have most of the fibre, B vitamins, minerals, and phytochemicals.

It also is supposed to have a lower gluten content so may be better tolerated than refined flour for those with gluten sensitivity.

As soon as the water hit the flour I could tell it was a “whole wheat,” albeit a red whole wheat. I can also attest to the lower gluten. My bread didn’t rise as usual, but that’s fine. It made a soft and delicious loaf that tasted great still warm with butter.

One of the main claims to fame of red fife grain is its links to Canada’s European history. Here’s some info.

From Wikipedia:
Red Fife is a variety of bread wheat (Triticum aestivum) that David Fife and family began to grow in 1842 In Peterborough Ontario. Legend goes that a friend of Mr. Fife collected a sample of seed from a ship in the Glasgow port. Red Fife was the first wheat to be named in Canada and many modern varieties of wheat owe their genetics to Red Fife.

The seed might have originated in Turkey, then moved across the Black Sea to the Ukraine where Mennonite farmers grew it, then seed was shipped to Glasgow, where a friend of David Fife's found it, sent a sample of seed to Fife in Ontario.

Mr. Fife grew out the seed, shared the seed with other farmers and called the wheat Red Fife because the kernels were red and his name was Fife.

Red Fife wheat is a living artifact that is part of Canada's living history, cultural and agricultural heritage.

Red Fife seed arrived in Canada when Canadian lands were being opened for producing wheat. Red Fife seed adapted to a great diversity of growing conditions across Canada. It was the baking and milling industry standard for 40 years from 1860-1900. Plant breeders around the world continue to use the genetics of Red Fife to make new varieties of wheats.

I’ve heard of “kettle breads” before of course. I like to think that mine is a resurrection of what our ancestors may have made when they were forging a new life in a new land.

This one's also autolyse, which means it sort of "self kneads" by rising slowly for 8 hours. I did mine overnight and had fresh bread on the counter by about 7am!

Mix together all the ingredients except the butter in a Dutch oven.

Knead as best you can with your hands for about 3 minutes. It is easiest done by pulling the dough from the bottom of the pot up onto the top, almost like folding. It will be a sticky mess.

Alternatively you could knead it in a mixer with dough hook for 3 minutes, but that defeats the idea of making it in a “heritage” manner.

Rub the top with softened butter. Cover with a lid and let sit overnight.

In the morning, remove the dough from the pot and knead briefly. It will be far easier to work with now.

Wash and dry the Dutch oven, and then rub the interior generously with butter. Plop the dough back in the pot and let it sit while the oven preheats.

Preheat the oven to 425°F. Once it reaches heat, bake the bread for 35 minutes, or until the interior sounds hollow when tapped with your fingers.

Remove the bread to a rack to cool.