Chaos is inherent in all compounded things. Strive on with diligence. – Buddha 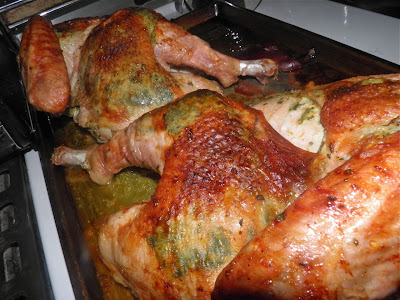 Today’s Easter, a day that brings chaos to many a kitchen. If you're having a family dinner with all the trimmings it can be a bit of an ordeal. Too many side dishes trying to be prepared all at once can do that.

A lot of it’s due to the main course – turkey. People get up at the crack of dawn to prepare that bird for dinnertime. There is a simpler way...spatchcocking.

Beep! beep! This turkey could almost be a roadrunner it’s so fast. Imagine a 4.5 kg (10 lb)roasted turkey that’s ready – from the oven – in about 1 hour 15 minutes. That's how long mine took.

Usual roasting time for a 10 lb bird is 3.5 to 4.5 hours! A larger bird will take longer. If you're not in the camp of bringing a roasted bird to the table for carving, this technique can be a godsend.

What is spatchcocking?
Spatchcock is one of those words thats meaning has changed from being a noun to a verb.

Originally, a spatchcock was a juvenile chicken or game bird. These birds we generally butterflied for much faster cooking than if left whole. I have done it a few times.

Today, spatchcocking (butterflying) is removing the backbone from poultry and flattening the breastbone by firmly pressing it down with your hands.

In this way the meat is all of fairly even thickness and will cook evenly in the same amount of time. Poultry is notorious for having dry breast meat and undercooked dark meat. This technique minimizes that problem.

When you look at the pictures you will see mine is in two pieces. That was an unfortunate circumstance of not being in my own kitchen. I had it beautifully spatchcocked but I did this at my mother’s house with her bakeware. I needed a bigger pan (or a smaller bird!).

So I finished the cut through and roasted it in two halves. The principle is the same. Of course this technique does not bring a turkey in all its glory to the table, but the sage herb butter can be just as easily used on an uncut bird.

To slowly baste under the skin and make the bird flavourful I combined butter, sage and orange rind. The mixture was then massaged between the flesh and the skin.

If you’re like most folks who don’t have a massive banquet table your bird probably doesn’t make it to the table whole anyway. That makes spatchcocking a very convenient option.

Being tied to the kitchen takes a lot of fun out of any holiday. With this recipe you can cut your time in half for your Easter turkey. Enjoy your family, rather than talking to them from the kitchen door! 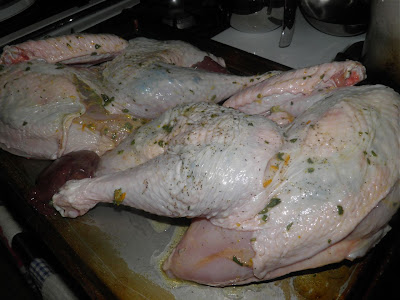 Take out the neck and giblets that come inside the bird and set aside. Place your victim on a countertop. This can get a bit messy and you need a little room.

With a pair of sharp kitchen shears cut down on both sides of the backbone from the neck to the tail. Remove and set aside with the other pieces. Trim off the first joint of each wing as well.

Remove any extra skin and fat and set it aside also. These pieces can be made into stock by simmering in water with onion, carrot, celery and herbs. If they’re meaty you could turn that stock into soup.

Place the bird skin-side up and press down on the breastbone with both hands until you hear a crack. The bird will then flatten out.

Loosen the skin from the bird with your fingers. You don’t have to do all the skin, just most of the breast, thigh and partially down each leg. Mix the butter, sage, rind and a little salt and pepper together in a small bowl. Spread the mixture evenly under the skin.

Place the turkey in a large pan big enough to accommodate it flat.

Take the juice of the orange and whisk it with the oil, salt and pepper. Brush the surface with the mixture, reserving any extra.

Roast the bird for between 1 hour to 1 hour 30 minutes until the internal temperature reads 180°F. Test the breast and thigh with an instant read thermometer. Brush the surface of the skin partway through with the remaining basting liquid.

When done, remove the turkey from the oven and let rest for 15 minutes.

Questions? Comments? Derogatory remarks? Just ask! I’ll answer quickly and as best as I can. If you like this post feel free to share it. If you repost, please give me credit and a link back to this site.
Posted by Docaitta at 6:59 AM