A Brief History of Time (in Greenfield)

It is sometimes very hard to tell the difference between history and the smell of skunk. – Rebecca West

Two questions arise from our recent move every time we tell people what we've done. In popular order, they are:  1) You moved where?, and  2) Where the heck is that?

So perhaps it’s time to answer those questions with some basic history of the area.

Greenfield is in the heart of Queens County. It’s on a road that crosses the waist of the county. There are three crossover roads. One goes between Liverpool and Bridgewater along the shore. One crosses the top of the county from Caledonia. And then there’s ours in the middle.

All three roads are old roads. This part of the province is as old (white settlement-wise) as most of the province, if not a little older. Shortly after the founding of Halifax settlers began to look for homesteads down along the south shore.

Queens County is also Loyalist country – those folk who packed up their lives in the rebelling New England States and moved slightly north, wishing to still be ruled by the English Crown. Towns like Yarmouth, Roseway (later Shelburne) and Liverpool grew in population.

Those historic links are still easy to see. If you close your eyes when you’re in Maine it’s not difficult to think you’re in the southern part of Nova Scotia. At least by dialect.

Did you know that Shelburne was almost the capital of the province? What a difference that would have made. I would have been moving closer to a more cosmopolitan centre. And I bet you there would be ferry service to Maine. 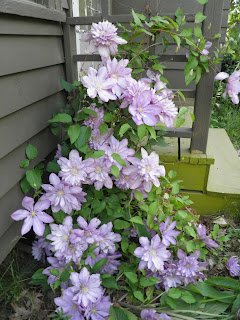 The founder of the feast, Samuel Hunt
My village, Greenfield, is a mill village (not to be confused with Mill Village, just down the river!!). Both the Mersey (flowing up from Liverpool) and Medway (our river) were dotted with mills in the 1800s, harvesting the woodlands and supplying people with good livings.

The river was a transportation artery, and the abundant fish living in its waters provided ready food. The woods also teemed with wildlife like deer, moose and the like. Plant life supplied additional food as well.

Our village was founded by Samuel Hunt in about 1830. He had been living further up the river/lake system closer to Caledonia and moved down to trade with the Mi'kmaq. The Mi’kmaq had a summer settlement at Greenfield. Their name for the spot was Ponoque. The river was Wigadoon. (Greenfield was called Ponoque until 1850.)

So what did Sam Hunt trade? In exchange for fish, pelts, etc, Mr. Hunt traded the native inhabitants "white folk necessities of life.” I’m not certain but one can imagine things like tools, gun, clothes, cooking utensils... One I am sure he sold was “firewater.” So Greenfield was founded partly to sell booze. Go figure. Some things never change.

One thing that did change over time was Mr. Hunt’s desire to sell liquor. The story goes that a couple kids (his son among them) got into the hooch and became alcohol poisoned. They were out for days. Mr. Hunt swore off the selling and consumption of alcohol once they came to.

I bet that’s how we got the Baptist Church. The village even had an abstinence society through the latter part of the 1800s. Thank goodness that’s over.

The first wedding in the village was between a Freeman forefather of mine and Sam Hunt’s daughter. I can’t remember their names. My mother would. So that’s how far my roots go back in this area. Hunts and Freemans. The founding families.

Making a living in the early 1900s
The village population grew and survived on logging, farming, hunting, guiding and fishing. The Medway River was at one time one of the best salmon fishing rivers in eastern North America. Rich anglers from New England used to flock here for sport.

Many villagers guided fishers (and hunters) as part of their yearly income. Some became famous for their skills. In the winter they switched jobs and brought logs down on the frozen lake to be used by the mill built at the falls. Freeman’s Mill.

My cousins still run the mill that was founded by my family in the late 1800s. That mill is one the largest employers in Queens County (if not the largest) now that Abitibi Bowater is gone.

At one time there were two hotels in our village. One was the Maple Leaf Hotel. The other was (you guessed it) The Freeman House. The Freeman House operated until the 1950s. It boasted in-house rooms with service, a beautiful window-lined dining room, and at least eight cabins people could rent located around the property. It all looked over the Medway.

The hotel was built on Sam Hunt’s original home. The hotel has been stripped off now and the original house stands in the centre of the village as a seniors centre.

The hotels went away with the fishing thanks to acid rain and over-fishing. But the village carried on, and has more amenities than any other comparable smaller centre.

An oasis of civilization
Besides the local employer, Greenfield has a church and attached gymnasium. The gym equipment equals what I saw at KIngs-Edgehill private school that last time I was there. Membership per year is a pittance, and you get your own key to come and go.

We have an elementary school, and have had since the founding of the village. Many of my relatives stood in front of class as teachers. My mother did for 36 years. The South Shore Regional (public) Library located in the school is named for her and her years of dedication. The current teacher is a very good friend, I believe inspired by her experience with my mom.

We have two stores, both with gas stations. One is run by Mi’kmaq folks. There is a small reserve on the south side of the river. The other store has potential for me to forage some necessitates when I settle in enough to cook again once I find the pots!!

Oh, and Greenfield has a NSLC liquor outlet. So full circle from Sam Hunt. I could go on, but I should get at the day and let all of you get to yours.

So that’s a (very) brief history of the place. I guess it’s up to me to write on the still blank pages of that living history book. I hope I’m up to the task. Some amazing people have lived in this spot. I have big shoes to fill.

Questions? Comments? Derogatory remarks? Just ask! I’ll answer as best I can. If you like this post feel free to share it using any of the links. If you repost, please give me credit and a link back to this site.
Posted by Docaitta at 7:01 AM