The essence of life is finding something you really love and then making the daily experience worthwhile. – Denis Waitley

You’ve seen them at the grocery store in the desserts cabinet of the baking section. Glossy chocolate atop yellow cake that’s been spit and filled with cream… with one glistening maraschino cherry (with a stem) on top… 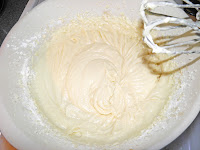 It looks delicious. Don’t be fooled.

If I had a dollar for every time I was sucked in by the allure of those Boston Cream Pies I would be a rich man. Well maybe not rich, but I would have all those dollars, plus what it cost me to buy the cakes!

The ones we purchase at both our grocery chains leave something to be desired. Have you ever bought a black forest cake or birthday cake at one of those counters? If you have, you know what I mean. I know they're doing their best, but they taste…"fake”.

Fake cake. How is that even possible? 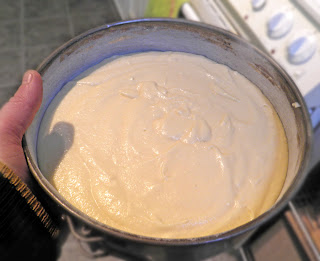 I made mine on New Years Day (part of my "try things I don’t like" resolution) and needed the better part of a day for the baking, cooling and assembling.

But it was worth it. Oh my, was it worth it. Four pieces worth it. Never, ever, ever, ever again will I allow one of those cakes to fall into my shopping basket at the grocery. The difference is dramatic to say the least.

But why is this cake called a pie? For that we have to look at some history.

History of the Boston Cream “Pie”
In times past the dividing line between cake and pie was far less defined than today. Home cooks were well versed in making baked goods and would have had all the necessary bakeware for them at hand.

In the New England of the 1800s pie dishes were far more common than cake tins. The first version of this cake may very well have been baked in pie tins, hence the name. Boston Cream Pie is quite similar to an earlier baked standard called “pudding cake pie.”

In 1856 the Parker House Hotel opened in Boston. It was the first Boston hotel to have both hot and cold running water. Fancy. They also had an Armenian-French chef, M. Sanzian. It is he who is credited with popularizing the “pie” in its present form.

His dessert was called Parker House Chocolate Cream Pie. As it moved beyond Boston, it retained the Massachusetts tie in its name – Boston Cream Pie. I don’t know if the chocolate refers to the topping, as today, or if the cake was actually chocolate. If anyone knows let me know in the comments.

Regardless, it gained wide popularity. No wonder. It's a fantastic dessert.

In 1996, Boston Cream Pie was declared the official state dessert of Massachusetts. It beat out Toll House cookies and Indian pudding, two other stellar desserts. 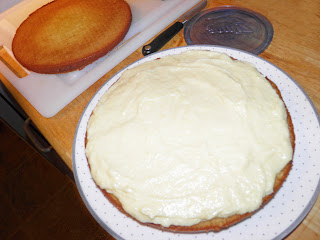 Preheat oven to 350°F. Place a piece of waxed paper on the bottom of a 9” spring form pan. Close the paper up into the ring to make a seal. Butter and flour the inside. Set aside.

Combine the butter and sugar in a bowl. Cream together until the mixture is light and fluffy. Then add the eggs, one at a time, beating each in well.

Sift together the flour, cornstarch, baking powder, baking soda and salt. Add 1/3 of the dry ingredients, then half the milk, 1/3 more dry, the remainder of the milk, and the remaining dry. Beat well and then stir in the vinegar and vanilla.

Immediately pour the batter into the prepared pan and place it in the oven. Bake on the middle rack for 50 to 60 minutes, or until a toothpick comes out clean when inserted in the centre.

(Timing note: while the cake is baking, make the pastry cream and chill it.)

Remove from oven and let the cake cool completely in the pan on a rack. Once cool, cut the cake into two equal layers.

Invert the top layer onto a cake plate or other tray (so the cooked top is facing down). Spoon the pastry over the cut side and smooth it out. Place the second layer of cake on top.

Make the glaze and immediately pour it over the cake. Smooth it out with a knife so it reaches the edge. The glaze will will set up in about 15 minutes. 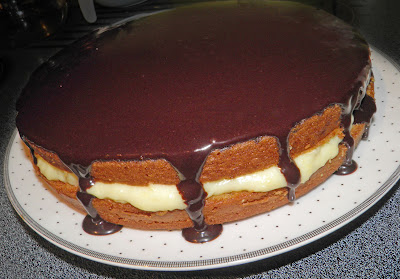 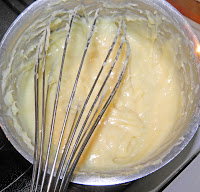 In a small saucepan, warm 1 cup of the milk over low heat until it is just scalding (scalding is when small bubbles form at the edge of the pan but the milk is not boiling).

While the milk is warming, whisk together the remaining 1/4 cup of milk and the egg yolks in a bowl. Then add the sugar and flour and mix until completely smooth.

Once the milk is steaming, add 1/4 cup of it to the eggs and whisk well. Then add another 1/4 cup and whisk again.

Transfer the egg mixture to the rest of the hot milk and continue whisking. Cook on medium heat until thickened, about 5 minutes. The custard will fall in ribbons from the whisk.

Remove from the heat, stir in the vanilla extract and butter, and chill. Place plastic wrap directly on the surface of the pastry cream before refrigerating to prevent a skin from forming.

This pastry cream recipe can be used to fill many other pastries as well – not just this cake. 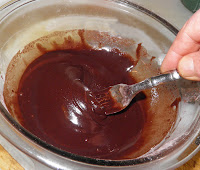 In a small bowl, combine the powdered sugar and the cocoa powder. Using a fork or whisk, stir in the milk until the mixture is smooth and glossy. Stir in the vanilla extract.

If not using immediately, put plastic wrap directly on the surface to prevent a skin, but you should use it right away as it has a tendency to set up and will be harder to get smooth later.

Even set up the glaze will be easy to cut. It will just be harder to get on the cake than if it's used right away.