Women might be able to fake orgasms. But men can fake whole relationships. – Sharon Stone

I’m going to ‘fess up about this one right away. It’s a complete fabrication. I don’t mean the meal isn’t real. It is. The recipe isn’t. Sort of.

For a brief moment I was standing on a precipice, bathed in the light of half-truth. (Half truth is a very flattering light, as anyone who has stretched the truth before well knows.)

I almost passed this recipe off as “Spanish.” But that wouldn’t be true. It is Spanish-inspired, but Spanish? No. That was a Spanish “no” by the way. We use the same word.

It’s unbelievably easy to drop the word “style” from a title and fall victim to pulling truth like so much taffy.

I resisted, so it's "-Style." This recipe's got a pound dog’s pedigree. Let me explain.

I almost always read several recipes before deciding what to cook. I borrow this and that and re-assemble into something uniquely my own.

This is my 795th post. Over that time I've exercised my culinary "legs." I've learned quite a bit about what goes with what, and the major differences a small change in a recipe can make.

So when I go recipe "foraging" I do so with some confidence. This time there were three significant inspirations for this dish.

The first was a Palestinian chicken dish called “Maqloobeh.” That’s where I got the covered, simmered rice technique. The recipe is on this site. Right HERE, actually. It’s tasty.

The second was Spanish paella. Imagine this if it were cooked uncovered, and with a lot more seafood.Many of the ingredients in this dish are in Spanish cookery: tomatoes, artichoke hearts, white wine, cilantro, shrimp, lemon, green pepper…

Lateral "seasoning" inspiration came from my searching for “Cuban shrimp dishes.” Interesting – many were much like Spanish dishes, except for differences in spices.

I kind of like the term "pound dog pedigree." For this recipe it’s very apt. The reason it’s Spanish-style is that is the “breed” that you can see most clearly. Just like a mutt that looks most like mom or dad, but also enough of the other to notice.

So what does mutt taste like? Pretty good, actually. More than pretty good. It tastes...bright.

The overall flavour is seafood and lemon with a fairly heady dose of cilantro. The rice soaks up a lot of wine flavours as well. The colour is beautiful. I cheaped out by using turmeric for colouring instead of saffron. There's a decent kick of chilli heat here too.

And this recipe makes a lot, serving four people easily as an entrée; six or maybe even eight people as an appetizer.

I was quite pleased by how well everything went together. With the lemony-brightness it's kind of a sunny day meal.

But even in the dead of winter this was great. I would hazard a guess that served with a nice Spanish white wine, on a cool summer evening on the deck, it would taste even better. Fear not, those days are coming! 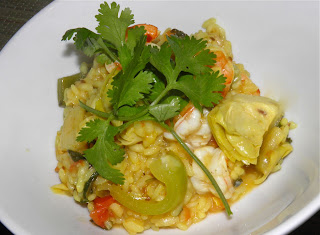 Peel the shrimp. Place in a ceramic bowl and squeeze the lemon juice over the top. Toss with a little pepper and set aside.

Heat the olive oil in a wide deep sauté pan with a lid. Add the onion and garlic and cook on medium heat until the onion begins to soften, about 2-3 minutes.

Add the cumin and chilli flakes and cook for 1 minute longer. Then add the rice and fry for about a minute, until well coated in the oil.

Stir in the lemon zest, turmeric, white wine and chicken stock. Then add the tomato, green pepper and artichoke hearts.

Finally add the cilantro. Add some salt and pepper, about 1/2 tsp each. Bring to a simmer, cover and cook for 10 minutes.

At the end of the 10 minutes, remove the cover and add the shrimp and lemon juice. Arrange in one layer on top of the partially cooked rice. Recover and cook for 10 minutes longer.

Toss together. taste for salt and pepper and adjust. Serve.

If you like this post feel free to share it using any of the links. If you repost, please give me credit and a link back to this site. Questions? Comments? Derogatory remarks? Just ask.
Posted by Docaitta at 6:24 AM