But Why? Homemade Salisbury Steak

Truth is stranger than fiction, but it is because Fiction is obliged to stick to possibilities; Truth isn't. – Mark Twain

Here's a strange one to make at home. File it under Guilty Pleasures. I should have made that a searchable category on this blog a long time ago… It now is.

It's a good thing I don't eat them often. They probably shorten my life, what with the probable amount of salt hidden in most pre-made foods.

I learned something today. I always thought that Salisbury steak was named for a place, but it’s not. From Wikipedia: Salisbury steak was invented by an American physician, Dr. J. H. Salisbury (1823–1905), an early proponent of a low-carbohydrate diet for weight loss; the term "Salisbury steak" has been in use in the United States since 1897.

So what does a growing boy do when the urge strikes? Either go to the store, or if you're like me, replicate the object of desire in the kitchen.

For those who don’t know, Salisbury steak is a seasoned ground beef patty. It has nothing at all to do with steak, except for what’s ground up to make it. It also comes swimming in a sea of dark mushroom “gravy.”

To round out the feast the Swanson variety has green peas and some reconstituted potato flakes – always a bit gooier than they really should be. But bathe them both in butter and you’re good to go.

“Faked” potatoes are also a guilty pleasure. Just don’t think of them as potatoes and you won’t be disappointed! I would try to replicate them but I imagine they would taste too real.

TV dinners have an inglorious pedigree. They were invented at a time when televisions were becoming a must-have item in everyone’s homes. That was the 1950s when life was all about convenience, as opposed to nutrition. The idea of leisure was epitomized by being able to watch Leave It To Beaver while having family dinner.

We can all thank a man called Gerry Thomas for both the product and the name of the Swanson TV Dinner in 1954. More than 10 million Swanson TV Dinners were sold the first year. For $.98, customers chose from Salisbury steak, meatloaf, fried chicken or turkey, served with potatoes and peas. Desserts were added later. I have no idea when the potatoes were switched for flaked potato.

I have to admit I didn’t do too bad of a job faking this. I’m not quite sure I understand how Swanson keeps their patties so flat. Mine shrunk in on themselves like any good hamburger does. Not a whole lot, but enough to lose that all important flatness.

Thank goodness the gravy hid it. I can’t say this is much healthier than pre-made, but at least I know everything that goes in it, and am able to control my salt intake.

I didn’t have the proper side dishes the night I made this. I should have had frozen peas and potato flakes. Canned corn had to perform as the under-study. 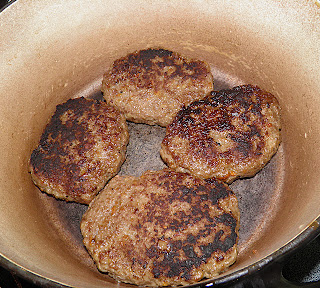 In a large bowl, mix together 1/4 cup of the onion soup powder with the ground beef, bread crumbs, egg, salt, thyme and black pepper. Shape into 4 rectangular patties.

Brown both sides of patties over medium-high heat in a large skillet or other pan with a lid. I used my Dutch oven. Remove the patties to a plate. They do not have to be cooked through. 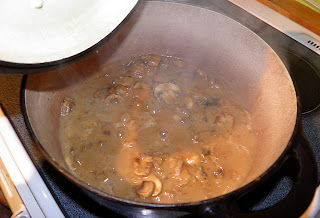 To whatever fat has been left in the pan add enough butter to make 3 tablespoons. Fry the onions and sliced mushrooms until they start to darken a little, and remove. The mushrooms will probably have sucked up all the fat. If so, add 2 tablespoons more to the empty pan. You need the same volume of fat and flour for the next step.

Mix the water, sugar, Worcestershire, mustard powder and the remaining soup mix in a small bowl and set aside.

Add the flour to the fat in the pan and cook until it starts to turn light tan. Do not let the roux over brown. Immediately add the liquid mixture and cook until it begins to thicken. Add the mushrooms and onions back and mix well.

Nestle the “steaks” into the “gravy” and cover the pot. Let simmer for 10-15 minutes.

Serve the Salisbury steaks with equally less than gourmet side dishes. Mmmm….