Kitchen Tips from the 1950s

from the Five Roses Flour “The Guide to Good Cooking,” 1959
The biggest seller is cookbooks and the second is diet books — how not to eat what you've just learned how to cook. – Andy Rooney

I love old cookbooks. Whenever I go to a used bookstore I make a beeline to the cookbook section. You never know what gems you’re going to find. 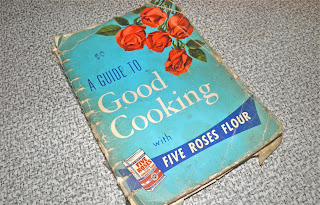 This cookbook isn’t from a used bookstore, but from my Aunt Hilda’s collection. Five Roses Flour is a brand that is still sold across Canada (and possibly in some parts of the USA).

I doubt that their cookbook is still being updated, but maybe… They do have a web site so probably recipes now reside there.

The cookbook was to encourage the use of their product. Aunt Hilda’s copy has a publishing date of 1959.

There are some real gems of recipes contained in the pages. Ones we all should know how to make – good old-fashioned fare. There’s also a page of coupons where you could send a copy of the cookbook to friends, mailed directly from Five Roses.

The cost to send all these wonderful kitchen goodies as a gift? 50¢, or 60¢ if you lived in the United States. Can you imagine? How much would you have to pay today, 50 years later?

There’s a page in the book of kitchen tips I just had to share. They’re very handy, still useful, and we should all at least know where to find them for when we’re “in a pinch.” So here they are.

I also compare two recipes: the 1950s version of French Toast and my modern equivalent. Obviously they didn’t worry about fat content back then.

Take a read, enjoy and think of times past, when a whole cookbook only cost half a dollar!

To make sour cream add 2 tsp of lemon juice or 1 tsp of vinegar to 1 cup of whipping cream.

To keep scalding milk from scorching rinse the pan with hot water before using.

To whip evaporated milk place a can of milk in the freezer until partially frozen. Pour contents into a chilled bowl, add 1 tbsp of lemon juice per every 2/3 cup of milk and whip as you would cream.

Modern hint: To make whipped cream from coconut milk, refrigerate a can of coconut milk for 12 hours, remove the solids from the top and whip.

To divide an egg, beat slightly and then measure with a tablespoon.

To prevent meringue on pies from shrinking spread so that it touches the sides of the pastry all around the edge. Bake for 15-20 minutes in a low oven (225°F).

To glaze the top of rolls, pastry, etc., brush before baking with a slightly beaten egg white mixed with 1 tbsp milk.

To keep cut fruits from discolouring, place in a bowl of water to which the juice of 1 lemon, or 1/4 cup pineapple juice, has been added.

To grease pans easily mix 1/2 cup of shortening and 1/4 cup flour to a smooth paste. Spread thinly on pans. Keep a supply of the mix in a covered dish for later use.

To make a smooth thickening of flour and water place both in a small jar, cover tightly and shake well.

To remove odours from jars and bottles pour a solution of water and dry mustard into them and let stand for several hours, then rinse in hot water.

To keep a bowl from slipping on a work surface place it on a folded wet towel.

To test heat of a griddle (or wok) place a few drops of water in the pan. If the water scatters it is hot enough to brown food.

Beat the eggs slightly, add milk and salt. Dip bread in the mixture one slice at a time. Drain and fry in deep hot fat (390°F). When golden brown, drain and serve with maple syrup or jelly.

Cut each slice on bread in half. Stir the spice into the milk and eggs mixture. Melt 1 tablespoon butter in a frying pan. Dip and fry slices of bread until browned on each side.

Repeat  dipping and frying, adding additional butter to the pan if necessary.

If you like this post feel free to share it using any of the links. If you repost, please give me credit and a link back to this site.
Questions? Comments? Derogatory remarks? Just ask!
Posted by Docaitta at 7:55 AM