Every natural fact is a symbol of some spiritual fact. – Ralph Waldo Emerson

For my original post about Witch Hazel, look here.

It’s been a while since I posted anything other than food. So I guess it’s about time. 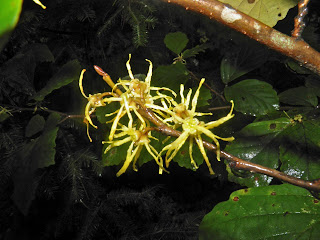 It’s also the perfect time to post about Witch Hazel because it’s the easiest time of the year to identify it. It’s in bloom in Atlantic Canada and is unmistakable.

Witch Hazel is a native shrub in Nova Scotia that is most easily identifiable when it is flowering. One would think that a flowering bush would do so in spring, but Witch Hazel is different. It blooms in autumn.

Witch Hazel (Hamamelis) has three species in North America and two in Asia. We have H. virginiana in Nova Scotia. All are deciduous which means they lose their leaves in fall. The leaves are oval and can be anywhere from 2” to 6” long.

Hamamelis means “together with fruit” which aptly describes the bush as it blooms concurrent with the fruit from the previous year’s bloom. The blooms of H. virginiana are “spidery” with multiple twisty petals that are a clear bright yellow. They are quite small, at about 1” to 1.5" wide, but usually bloom in clusters on a mature shrub so are easy to spot.

The common name is from the Middle English “wiche” which meant "bendable." Many early settlers used the branches for divining rods which probably help solidify the “witch” part of the name.

Witch Hazel's main claim to fame is that the leaves and bark can be harvested and easily made into an antioxidant astringent. This product is extremely common in healthcare commercial products.

Because of its natural health properties, Native Americans used Witch Hazel extracts to treat cuts and scratches, insect bites, poison ivy, bruises, swellings and even sore gums. I would suggest that it NOT be ingested but used externally only.

It is these abilities that make it so valued as an addition to modern commercial products. Witch Hazel has found its way into sunburn and acne creams, psoriasis and eczema treatments and even poison ivy medications, plus a whole host more.

Non-medicinally, it can be combined with other common ingredients and used as a household cleaner and to clean jewellery.

Besides the leaves and bark, the seeds are edible. When roasted they supposedly taste somewhat like pistachios. I have not tried this.

(This recipe uses only bark. Others use both bark and leaves...)

Strip off the leaves and discard. Then remove the bark from the wood and discard the wood. Add only as much bark as can be completely submerged in the water.

Bring to a boil, reduce heat to a simmer and let cook for at least 30 minutes. The longer you cook it the stronger your decoction will be.

Let cool and bottle. If desired, add some isopropyl alcohol (about 10%) to the mixture to extend the shelf life.

If you make homemade personal care items—soap, deodorant, creams, etc.—you can use this decoction in those products. It can also be used "as is" as a topical treatment for acne, sunburn or other skin irritations. (Test a small spot on your body before you use it all over.)

Two notes:
1. Look up more detailed information on making and/or using Witch Hazel on the web for full benefits. Resources are plentiful, and recipes abound for a myriad of home products.

2. Some people can be allergic to Witch Hazel extract, so before making and using you may want to check with your doctor, especially if you are pregnant or breast feeding. MOST people, though, experience no adverse effects from witch hazel extract.

If you like this post retweet it using the link at top right, or share it using any of the links below.
Questions? Comments? derogatory remarks?
Posted by Docaitta at 7:33 AM