Have you ever been walking and saw a plant – obviously native – that you have no idea what it is? That has been happening to me for the past 5 or 6 years in Point Pleasant Park.

Every spring when walking the dogs we would pass this round-ish bush, about 4 feet tall, that was covered in small yellow “bells.” I had no idea what it was, or where it may have come from. I hadn’t seen it anywhere else outside the park so though it may have been "imported" by birds. 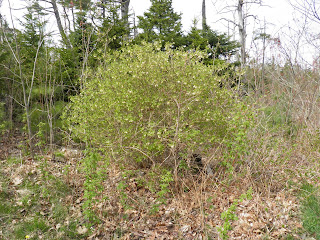 Well, I finally found out what it was this year. The plant in question is called northern bush honeysuckle, botanically called Diervilla lonicera. And it’s extremely local, first being named 300+ years ago from a sample collected in our province.

Around 1700, a Frenchman named Dièreville visited the French colony of Acadie – now called Nova Scotia. He gathered plant specimens unknown in the Old World, and upon his return to France this one was named in his honour, Diervilla lonicera (Diervilla's honeysuckle).

Diervilla has only three species, all native only to the New World. Two are in the southern United States. The third, D. lonicera has a very large range, extending from Alabama/Georgia in the south to all of eastern Canada and west all the way to Saskatchewan. It is supposed to be hardy to USDA Zone 2b. That is hardy.

Northern bush-honeysuckle is a small, mound-shaped, deciduous shrub to 3-4 feet tall. The leaves change from yellow to red in autumn. Small, bell-shaped flowers are yellow at first, becoming orange or purplish-red before dropping off. The bees absoltely love them.

They are supposed to bloom from May through August, and perhaps in some areas they do, but it always seems that blooms are scant after the first flush here in May. From those flowers small seed pods grow in pairs (somewhat like a Maple key in my eye) with a single seed in each compartment.

Bush honeysuckle is somewhat insensitive to light changes so will grow in sun, part shade or shade. It also tolerates dry soil conditions slightly on the acidic side. That pretty much describes every gardeners nightmare location and soil.

They are also supposed to sucker and form broad thickets. I don’t find that to be the case in Point Pleasant. The bushes I have seen (I’ve spotted  few over the years) seem to be quite happy staying put. 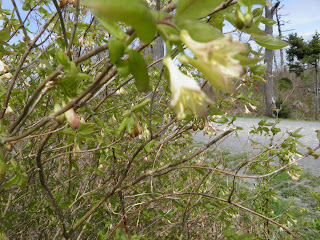 As far as growing it in your garden, good luck trying to find this plant in a garden centre. native species are not easy to find because, well, they’re “native”… So one must use other means.

You can propagate by cuttings from both the new green and slightly woody parts of the bush, as well as the seeds. Apparently there is one variegated leaf variety that is available, but I haven’t seen it in Nova Scotia. That doesn’t mean it’s unavailable, though.

I have found it on one of the best native plant web sites I know of: Prairie Moon Nursery. They are an amazing resource for native plants and seeds of all types. They can be found at http://www.prairiemoon.com. If you have even a passing interest in native plants you should really check these folks out. They’re amazing.

Lonicera is the genus name of all honeysuckle and the last part of this plant’s botanical name, not the first part. It is a relative of the true loniceras. Lonicera has been widely used in folk remedies for cough medicine or sore throats. I have also found reference to native tribes using bush honeysuckle for urinary troubles, as a dieretic, an anti-vertigo medicine and also a treatment for gonorrhoea. 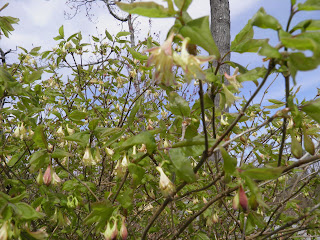 A book called The National Dispensatory, author Alfred Stillé (published in the late Victorian Age) says that the whole plant is considered diuretic and has been used to relieve itching. The full abstract of the publication is as follows: The national dispensatory: containing the natural history, chemistry, pharmacy, actions, and uses of medicines ; including those recognized in the pharmacopias of the United States, Great Britain, and Germany, with numerous references to the French codex (1887).

Seems to have a “wide variety” of uses. But gonorrhoea? I think I would risk a visit to the doctor… Although medicinal recipes can be found online, some species of honeysuckle are poisonous. So as with all native plants extreme caution should be used unless you are absolutely sure of what you’re gathering.

Regardless of any specious medicinal uses, northern bush honeysuckle is a handsome native plant. It always catches my eye every spring when I encountered it.

I currently have 5 clippings tipped with rooting compound in soil. We’ll soon see how easily this plant roots…

If you like this post retweet it using the link at top right, or share it using any of the links below. Questions? Comments? Derogatory remarks?
Posted by Docaitta at 8:07 AM