The only real progress lies in learning to be wrong all alone. – Albert Camus

How time flies… It's been nearly 2 weeks since I picked marsh violets. At the time I suggested I was going to make liqueur. Well, I did – and it most definitely is not blue.

Thats a bit of a drag. I was at least expecting pink. But it was not to be.

I partially blame it on the botanicals (peppercorns and cinnamon bark), but it could also have been the green bits that hold the petals together as well…

It still turned out to be a spectacular liqueur, slightly peppery and spicy. Just not the “right” colour.

This liqueur is definitely worth making the way the recipe outlines. It will be fantastic “on the rocks” or even in a martini. I don’t think you would notice it much if used in a mixed drink.

But I would recommend some changes for those of you who would like something less golden and a little more blue/pink in colour. I have an alternate preparation listed at the bottom of this post.

Violets are blue and pretty much tasteless. I can attest to that on both counts. If anything, they are more “spicy” than “flowery.” I would call rose petals and lavender ‘flowery.” So what needs to be done to make an acceptable liqueur is to play up the violet's qualities.

To do this I included three botanicals: peppercorns, lemon rind and a small piece of cinnamon stick. Both the cinnamon and peppercorns added to the golden colouring over the two week infusion. I wasn’t sure how much.

I was very pleased to note that within 1 hour of introducing the violets their colour was coming out into the vodka in pinkish whisps. It wasn’t enough to overpower the other colouring agents though.

So this didn’t turn out exactly as hoped, but still not a disaster. The only issue I have with it is the colour. I wanted blue, and didn’t deliver. f I would have added blue food dye it would have turned green… so I resisted the temptation.

Just so you know, I am almost 100% certain that any commercially-produced violet liqueur that is blue in colour owes that hue to artificial means. There’s just no other way. I also would be interested in knowing where the “violet” taste comes from.

Marsh violets are Viola cucullata. I have read that Viola odorata have a stronger fragrance. 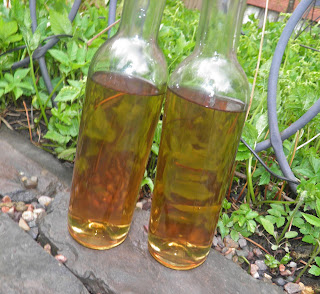 Combine the violets, vodka, cinnamon and rind in a Mason jar and let infuse for 1-2 weeks. Strain through cloth.

Bring the water and sugar to a boil together in a saucepan. Let boil for 5 minutes. Remove from the heat and cool.

Combine with the infused vodka. Bottle.

Leave the violets out until the very end of the process.

At the end of the 2 weeks, add the dried violets. The colour will begin to leech out almost immediately. After about 1 hour, strain the violets and other botanicals out of the vodka, make the simple syrup, combine and bottle.

This version will give you a far pinker (as opposed to golden) version of the liqueur. It still won’t be blue.