Words today are like the shells and rope of seaweed which a child brings home glistening from the beach and which in an hour have lost their luster. – Cyril Connolly

This is something that I suggest everyone do at least once, if you can get your hands on Irish Moss. This sort of thing helps put you back in touch with nature, and a little further away from the chemical-laced world we live in.

It's an amazing thing to go to the seashore, pick up some seaweed and then go home and make pudding.

It's even more amazing when you realize that what you are doing is recreating something that has been done for hundreds, if not thousands, of years.

Two days ago I posted about going to a local beach and finding some Chondrus crispus (otherwise known as Irish Moss). It is one of the more common seaweeds growing on both sides of the Atlantic Ocean.

From this most unpromising plant comes the food additive called carrageenan. Carrageenan is a natural thickener and stabilizer used in a wide range of food products like frozen yogurt, reduced-fat ice cream, chocolate milk, toothpaste…

Carrageenan health scare? Not so fast...
If you research on the internet you will find articles about carrageenan being bad for you. This is due to a bit of confusion between carrageenan (the food additive) and "degraded" carrageenan, a non-food additive and chemically-created product of carrageenan.

The following information is from the "Tom's of Maine" website. That business is a respected natural product company that has been in existence for decades. One of their main products is toothpaste, hence the reference at the end of the quote. 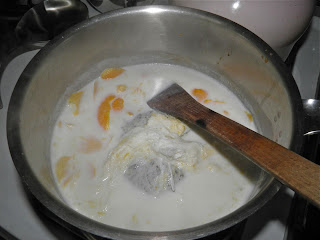 There is some confusion about carrageenan which has cast an unfortunate light on the ingredient. Poligeenan is a chemically degraded derivative of carageenan which is used for industrial (non-food) purposes. Although poligeenan does not posses the thickening or stabilizing properties of carrageenan, it was improperly named "degraded carrageenan" and for a short time the word "carrageenan" was used ambiguously and might refer to either food-grade or degraded carrageenan. Due to this confusion, the US Adopted Names Council determined that "poligeenan" was a more accurate and descriptive name for the chemically degraded form of carrageenan. While poligeenan has shown unfavorable health effects in studies, food-grade carrageenan has no known toxicity or carcinogenicity and is Generally Recognized As Safe (GRAS) by the US Food & Drug Administration. Unfortunately, because the two ingredients were referred to by one common name for a short time, many people have been left with the mistaken impression that the negative health effects shown for poligeenan are true of food-grade carrageenan. Food-grade carrageenan is an entirely safe and appropriate ingredient for toothpaste.

So hopefully the above allays any fears you may have.

Now back to making pudding.

I dried my Irish Moss in the oven, which was the quick way to handle it. As such it turned very dark. The usual way to dry it is in the sun, where it bleaches to a beautiful off-white. This makes the potential for "coloring" of your final pudding less. I noticed hardly any coloring from my moss. So I guess either methods will work.

Something weird happened when I reconstituted my moss in warm water. The liquid instantly – and I mean instantly – became slightly gelatinous. That was strange, and I also was worried that I was "rinsing away" its thickening abilities. But I didn't have to worry.

The moss reconstituted in just a couple minutes, and was ready for making my pudding. I wanted to have a pudding I could mould, so I opted for a larger quantity of Irish Moss versus milk ratio. You can make anything from "solid" to creamy, depending on cooking time. Experimentation will have to be done…

So this is my recipe, based on a couple I found "here and there."

By the way – there was no scent or taste of ocean or seaweed in the finished product.

Reconstitute the moss in some warm water. Inspect it carefully and remove any debris. Place the moss in a double thickness of cheesecloth and tie it well.

Place the moss, sugar, milk, juice and rind in a saucepan.

Bring to a simmer, reduce heat to medium, and let bubble away for 20-25 minutes.

Stir almost constantly during that time. You will notice the milk becoming thicker.

At the end of the cooking time strain the mixture and pour into an oiled mould. This helps extracting the set jelly when you're ready to serve.

Refrigerate for a couple hours before unfolding. I found the thin layer of pudding I poured as a "taste test" started to set up the minute it started to cool.

To serve, unmould, slice and serve with raspberries mashed with a little sugar.

*Optional flavors for this pudding could be good old fashioned vanilla, nutmeg, or even coffee. Experiment!

If you like this post retweet it using the link at top right, or share it using any of the links below. Questions? Comments? Derogatory remarks?
Posted by Docaitta at 10:43 AM