The Garden Centres are OPEN!

Spring has sprung the flowers have riz. I wonder where the birdies is.

My Aunts Hilda and Nettie used to say that to me as a very small clild. It’s interesting the things stick with you from when you were very, very young.

We now live in the house where I spent those early days. My mother and father worked and my two maiden great aunts looked after me in their home every day until I was old enough to attend school. They took me everywhere they went. I had an interesting upbringing, through the lens of two active 70-something women from Boston.

If who I am has anything to do with nurture, then those two grace-ful (hyphen intended), caring, strong, kind women have a lot to do with the man I am today. I hope I’m doing them proud.

They evidently loved life, and spring always made them excited. They looked forward to the crocuses,  snowdrops and forget-ne-nots. Those were sure signs that everything DOES have its season, and that after a dreary winter and early spring the sun will once again warm the cold earth and life will sprout anew.

It is now, most surely, time to plant, or at least plant some things. We had a bit of frost last night, and it settled on our new purchases. What purchases you may ask.


On the road to partial self-suffiency
With the move I promised to myself that part of this new life would be more self reliance. With that comes requirements to partly grow our own food. I’ve taken some tentative steps in that direction.

Yesterday my husband and I took a run to Bridgewater and hit up some local nurseries. We went to three favourites: The Village Nursery in Pleasantville (villagenusury.net), Wiles Farm Market (wilesfarmmarket.com), and Canadian Tire. Yes, Canadian Tire.

The reason we find Canadian Tire such a destination for plants is mostly because of their shrubs and trees. We purchased two pear trees there for $37 each plus tax of course. An Anjou and a Golden Spice. Each were over 8 feet tall and ready to bud. Last week I picked up a haskap berry plant. That brings our total to three.

If you have a larger Canadian Tire where you live, get thee to it. Their selection is at its peak. They have peaches, apricots, plum, and of course apple. If you love Rhodos, large pots are about $45. Go soon.

Next stop was The Village Nursery. It’s a little out of the way, about at 10 minute drive toward Risser’s Beach along the LaHave from Bridgewater. But it’s well worth the jaunt. They have a lot of unusual stuff.

A few years ago we picked up Optunia, an overwintering cactus that some day – some day – may bloom with golden yellow flowers. It’s doing well in our Zone 5B-6.

Yesterday we picked up ten giant miscanthus and a jostaberry. The giant miscanthus (hopefully up to 10’ tall) will be the start of a screen between us and the road. We live next to the mill so there’s an awful lot of truck traffic (and way too much dust to tolerate).

The jostaberry is something I had never heard of before. Apparently it’s a cross between a currant and a gooseberry. It’s uncommon because it doesn’t take well to mechanical harvesting, ergo never seen in groceries as a picked fruit.

Of couse those three plant stores are only a few of the many close, or within a nice drive’s distance, of our new home. There’s Bayport Plant Farm in Rose Bay (the late Captain Dick Steele was world famous in Rhodo culture), Pine View Farm in Bridgewater...

Going towards the Annapolis Valley opens up a whole other world. We found a sweet little place on our honeymoon in Lequille, just outside Annapolis Royal, that had some very unusual stuff. And then there’s Blomidon Nursery just off the 102 Highway from Halifax. I smell a valley trip coming soon.

The garden centres aren’t at their full on best (annuals and many herbaceous perennials have yet to show) because of the risk of frost, but they’ve started, and depending on what you want the selection is at its best. 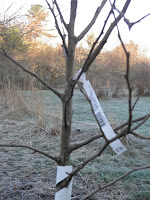 So we’ve started on some fruit for later in the summer and fall. Haskap, jostaberry, pears... Oh, and we found a Damson plum when the hubby cut down a massively overgrown rosa multiflora. They’re beautiful, but invasive. This one probably covered an area about 16’ x 10’.

One up-side is that everything underneath dies, so no need to fight against grass. It will be a perfect area to plant some vegetables in the next month. One has to wait until the risk of frosts like last night are passed. Probably about 2 weeks or so.

I’ve been collecting squash seeds for a while now, and have a surprise post for you in a few days. (And it has nothing to do with squash.)

That’s all I will say now. I know this isn’t a post about food, but it’s a post about “future food.” Everyone has space for a currant, or haskap. Sacrifice some of that flower border and put something in you can use in the kitchen.

I know flowers are the food of the soul, but you need the real food too...

Questions? Comments? Derogatory remarks? Just ask! I’ll answer quickly and as best as I can. If you like this post feel free to share it. If you repost, please give me credit and a link back to this site.
Posted by Docaitta at 8:10 AM