There's an old saying... that says, fool me once, shame on — shame on you. Fool me — you can't get fooled again. – President G.W. Bush

Of course what he was trying to say was “Fool me once, shame on you; fool me twice, shame on me.” In effect, be wary of those who have already proved untrustworthy lest they do it again. Be vigilant.

First it was their attack ad released mere moments after he won the nomination. It was aired on programming viewed mostly by middle-aged males, a Blue Jays baseball game, an English Premier League match and a PGA golf tournament. “He’s way in over his head.”

One part of that ad resurrects very old footage of Trudeau saying "Quebequers are better than the rest of Canada" (CTV, 10/15/1999). The attack ad states this is divisive.

Just don't talk about this: Stephen Harper opening up the 2010 Calgary Stampede, where he called Calgary the "greatest city" in the country. Talk about East/West divisiveness.

Airing the ad during middle-aged male programming is an important fact. Trudeau is polling as well with men as he is with women. Men are the Tories’ voting base. They’re afraid, I believe.

Not only did the Tory attack ad use old and out of context quotes but also out of context imagery to try to smear how we voters feel about this man. The 2011 "striptease" was for a "win a lunch date" fundraiser for the Canadian Liver Foundation. He helped raise $1,800.

For this they used their own Conservative Fund of Canada money to make and distribute that travesty against decency and Canadian values.

This time it’s a bit different. They’re using our taxpayer money, and are not just attacking his abilities, but casting doubt on his masculinity. This is dangerous ground, Mr. Harper. There are laws against behaviour similar to this. I believe you have even passed some in “your” parliament, and are about to pass more.

My knickers are in a twist
The latest missive from the "Harper Government" is what forced me to raise my voice today and speak.

The newest bit of nastiness from the Conservative party is a bulk mail flyer that will be arriving in your mailbox soon. This is mailed courtesy of our MPs constituency mailing service. So we are paying for this, but it has nothing to do with government affairs.

Well I believe that the majority of Canadians would disagree with you, Mr. Harper.

I’ll tell you what really pisses me off. It’s the manner of the attack.

I’m a designer. I know what a visual message is – and this one is bad. The flyer uses some not so subtle techniques to throw doubt on Trudeau’s manhood. 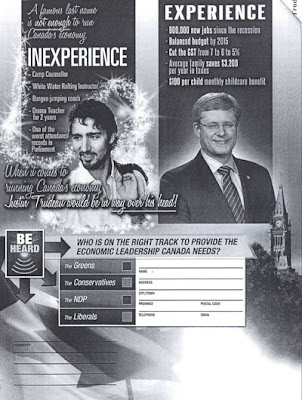 The flyer is divided in two. On the left Trudeau, on the right Harper. One of the main typefaces used is a very feminine script (Honey Script to be exact).

The image of Trudeau shows him a little scruffy with an open collar shirt and a jacket slung over his shoulder. He kind of looks like a sleazy guy at a bar.

There is also a trail of “pixie dust” swirling down and around him. It looks very much like what Tinkerbell used to leave circling Cinderella’s castle at the opening of Disney’s Sunday night TV.

Mr. Harper, on the other hand, is button down perfect, on a plain background with only what as a designer we would call “masculine” typefaces. He even has a little bit of the Peace Tower on the bottom right.

Visual messaging has a long and proven record of swaying opinion, as we all know.

This not so subtle messaging is meant at best to give the feeling of effeminate weakness to Mr. Trudeau, and at worst associate him with being a “fairy.”

Read the text on the left. "Drama teacher for 2 years." We all know about drama teachers, wink, wink.

(Did you know Stephen Harper worked in a mail room at Imperial Oil once? Not much qualification for Prime Minister there...)

Those who attack others usually have no record of merit to stand on themselves or have things they want us to forget. That’s why they do it. Deflection is the best friend of a poor record.

And our current government is in desperate need of deflection. The litany of problems associated with this government seems endless.

Today’s horror?
News organizations are reporting on a RCMP memo that says no members are to meet with MPs or Senators without prior approval. It cites the need to avoid "negative consequences for the organization and the government.”

Specifically, they are to ask permission from a liaison office that co-ordinates RCMP strategy with the office of Public Safety Minister Vic Toews. Our national police force was just politicized.

The above is sadly a very partial list. It seems every day brings some other assault on our traditional Canadian values. And we have to put up with it until 2015.

What can we do in the interim?
Well, first don’t let this sort of virulent attack affect your opinion of Mr Trudeau or any other MP or person running for office. That’s what the Conservatives want. They did it with Stéphane Dion and Michael Ignatieff and are trying again.

This time, though, I think they’ll fail. It’s obvious what they’re trying to do. They have finally achieved the transparency they campaigned on – and it isn’t pretty.

For my part, when my flyer comes I’m going to mark it “return to sender.” Hopefully we’ll do the same to many Tory MPs in the next election.

Questions? Comments? Derogatory remarks? Just ask! I’ll answer quickly and as best as I can. If you like this post feel free to share it. If you repost, please give me credit and a link back to this site.
Posted by Docaitta at 7:37 AM