All our words are but crumbs that fall down from the feast of the mind. – Khalil Gibran

A veritable feast. That’s what these two recipes are. They really hit the spot.

I stumbled across these two a while ago and thought I should try them sooner or later. Both sounded more than a little intriguing.

The chicken recipe was actually for chicken wings, and used some ingredients I switched out, and some I left out. So let’s call it an inspiration recipe. It’s certainly not a rip-off (or I would tell you so…). The corn recipe was a footnote someone left. “You can also try…” No amounts or directions – just an offhanded hint.

The recipe started life as a marinade for chicken wings. But I even switched out the cut of meat (to thighs) and used it as a basting sauce. I also brought the leftover sauce to the table. Waste not, want not.

The sauce was thick, sweetish without being overly so, and very, very garlicky.

I actually bought two hard neck loose garlic from Argentina (I know, I know…) instead of the three pack of white Chinese -origin garlic.

There is a difference. I found the hard neck garlic very much stronger. That was good for me to discover. Two hard neck were about the same cost as the 3-pack of Chinese, and about the same physical yield. They're bigger garlic.

This autumn – after our move is all done – I’ll be planting garlic so I won’t have to purchase from half way around the world, or at least that’s the plan. The garlic will have to cooperate too. (Did you know you plant garlic in the fall for harvesting next summer? More on that later.)

Suffice to say that the sauce was amazing on the chicken. When one thinks of garlic chicken it’s usually a Chinese recipe. This most certainly is not.

Corn is also making the rounds as a cheap dinner ingredient right now. Local corn hasn’t come onto the market yet (once again, I know…), but at $1.50 for 5 who can pass it up?

For a different twist from boiled, I opted to broil the corn in the oven. If you remember, I am BBQ-less until we move, so that’s my work-around. Both these recipes would be stellar done on the BBQ, charred to perfection.

The secret to this corn has nothing to do with the vegetable, but with the butter. Fresh cilantro chopped and combined with ground cumin. Wow. That’s a keeper. Amazing. Earth shattering. (Ca you tell I liked it?)

Try these recipes. You could do both on the BBQ just as easily as in the oven. Easier, probably. Directions for both methods are below.

Purée the cooking sauce ingredients. The result will be a thick, orangey sauce. Yield is about 1/2 to 3/4 cup.

If using a BBQ, you can marinate the thighs for 1/2 hour in the sauce to boost the flavour a little. But do not bring any excess to the table, as it will be contaminated by raw chicken.

Grill the chicken on both side until done, painting the thighs with additional sauce as they cook. 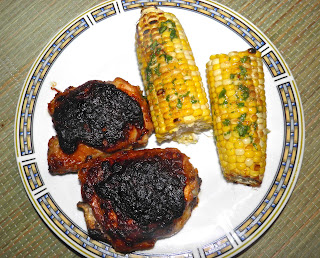 If working indoors, preheat the oven to 350°F. Heat a cast iron (or other oven-safe) pan on the stove. Fry the thighs, skin side up, until the chicken releases from the bottom of the pan. Paint the tops of the things with the sauce.

You will not need to add any oil. Fat will render out when they cook.

If you have a lot of fat drain some off before finishing in the oven.

Let the thighs cook until an internal temperature reads 180°F, about 15-20 minutes.

Meanwhile… work on the corn. This is simplicity itself. Clean the ears of any husk and silk, place on the BBQ or right on the rack in the oven a few inches from the element.

Once one side is slightly charred flip and do the other side. It will take about 4-6 minutes per side.

Mix the softened butter, cumin powder and cilantro together and bring it to the table. It’s wonderful with the corn.

If you like this post retweet it using the link at top right, or share it using any of the links below. Questions? Comments? Derogatory remarks?
Posted by Docaitta at 9:37 AM