Once the last tree is cut and the last river poisoned, you will find you cannot eat your money. – Anonymous

I remember being warned about Nightshade (Solanum dulcamara) from the same age as I was warned about poison ivy. I was to never eat it and shouldn't even touch it – either one, to be exact.

Now that's certainly sound advice to instill in a child, because it's only a "one, two, three" before one of these deceptively delicious-looking fruits would end up in the mouth. So if you're warned to not touch it, the chances are lessened they'll even be in your hand.

You child will encounter it. Make no mistake. It's quite common in Nova Scotia and will even spring up, uninvited, in our flower gardens.

The berries are red and quite attractive. The other type in Nova Scotia (Solanum nigrum) is pretty much the same looking plant except it has black berries as opposed to red, and white flowers instead of purple.

Nightshade is native to Europe and Asia, but is now naturalized almost world wide, where it is an invasive weed.

It can grow in woodlands to scrubland, hedges and marshes. Nightshade is a semi-woody perennial vine, which scrambles over other plants, and is capable of reaching a height of 12 feet, although 3-5 feet is far more common. The leaves are arrowhead-shaped, and often lobed at the base.

Nightshade flowers bloom in loose groups. They are star-shaped with five purple petals and yellow stamens and style. The resulting fruit is an oval red berry that serve as food for many birds. In fact, it is an important food source for some European thrushes. I have found from personal experience the little fruits actually smell a little like tomatoes, not unpleasant at all.

It's interesting information about being food for birds, because the information on human consumption is sharply divided.

Even more interesting is that three members of the Solanum family are cultivated as extremely important food crops for humans. What are they? The tomato, potato and eggplant.

I found the following post online, from no other source than our own Canadian Biodiversity Information Facility:

General poisoning notes:
Climbing nightshade (Solanum dulcamara) is a naturalized woody vine that is found along fencerows, among shrubbery, and at wood edges across most of southern Canada. The plant, especially in its green immature fruits, contains steroidal alkaloids, which have caused poisoning in cattle and sheep. Humans may have been poisoned after ingesting immature berries. Recent experiments show that the mature red berries contain only a small amount of toxin and have little chance of harming children (Alexander et al. 1948, Cooper and Johnson 1984, Hornfeldt and Collins 1989).

So I guess it's the immature berries that are to be avoided more than the mature. Good info to know, or is it???

Just when I was believing our Canadian Government (for the first time in a long time...), I found this in the Nova Scotia Poison Plant database from the NS Museum system:

Most toxic are the leaves and unripened (green) berries.

Poison Type
Indole alkaloids in jimsonweed; and solanine, another toxic alkaloid, in green potatoes and nightshades.

Although fatal human poisonings are rare, there have been several cases. The active poison is believed to be solanine. Solanine is a glycoalkaloid and is the exact same compound that makes green-tinged potatoes inedible.

If you're interested in what other plants are lurking around that might kill you, take a look at the following.This is a little self-serving, but here's a link to a brochure published by our own IWK Health Centre. It lists a great number of poisonous plants that can be found in the wild or in the home. It's a very useful guide for any parent – or even pet owner. 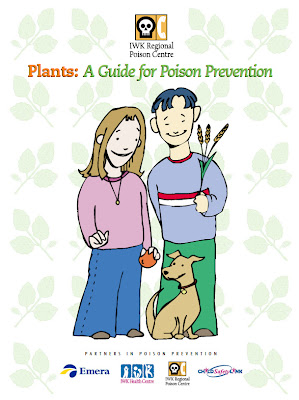 Why self-serving? I designed the brochure! (Many years ago now...)

If you like this post retweet it using the link at top right, or share it using any of the links below. Questions? Comments? Derogatory remarks?
Posted by Docaitta at 9:22 AM