I predict you will sink step by step into a bottomless quagmire, however much you spend in men and money. – Charles De Gaulle (referencing the Vietnam War)

Unlike yesterday’s post, this recipe takes a little longer. It comes in at slightly more than 1 hour. But I needed something like this.

Friday was a bit on the stressful side. We’re finishing up inspection on the “country” house we hope to move to, but one obstacle stands in the way. And it’s one that could literally cause a really big stink: the dreaded septic field.

Living in the city, and being hooked to the city sewer, made us never have to worry about that sort of thing. But we’re both originally from the country so we know the importance of a perfectly functioning septic field.

It’s not glamorous, but some necessities aren’t.

Anyway for most of the day we were in a bit of a quagmire, if you’ll pardon the pun. The homeowner didn’t want to dig another hole in his front lawn (he had already dug one for us), and we needed to inspect the outflow. A blockage, one might say...

We finally found a potential solution quite late in the day. It’s called a hydraulic load test –  and it’s non-invasive. Basically, the septic tank is flooded and then the outflow is tested to see the dispersion/recovery is working correctly.

With this test we will “see” if the field is working even without a visual inspection of the actual pipes out into it. Keep that test in mind if you’re thinking of purchasing a house without city sewer hookup. A mere snip at $300...

It’s amazing the things you have to find out about, and then learn enough to understand, when doing things around a house. It's also amazing how often they bleed your wallet.

So I was feeling  bit “punchy,” or actually a little bit more like I was punched when 5pm rolled around. If the septic failed we would have to withdraw our offer or get a massive reduction in price. A septic field can cost upwards of $20 to $30 thousand to put in.

So I was glad that we found (hopefully) an equitable solution. And at day’s end I was hungry like I had run a marathon, a sure sign of my relief. So what hits that kind of spot any more than comfort food?

Comfort food, as a rule, takes a little longer but it’s worth it. It fills your stomach and your soul.

I've been eating more eggplant this summer than in my entire life up to this point, I believe. This is the first time I have made this particular recipe, but it is an instant favourite – even with this just one try.

I bet your family will feel the same. It’s a hug for your tummy.

Run a knife around the perimeter of each half and then in a diagonal pattern in the centre. You don’t have to go tight between the skin and flesh. This cutting helps the eggplant cook faster, and in separating the skin and the flesh to make the stuffing.

Place the halves in an oven proof dish. Sprinkle the top of each half with 1 tbsp of olive oil, salt and pepper. Bake for 30 minutes. Let cool until able to be handled safely, about 10-15 minutes. (But leave the oven on.) 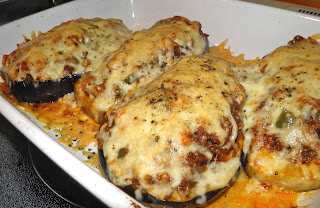 While the eggplant halves are roasting, make the rest of the filling. Heat the remaining oil in a large sauté pan. Sauté the onion, garlic and green pepper until they soften slightly. Then add the ground meat and sauté until no longer pink.

Add the wine and tomato paste and cook until almost completely dry. Then add the rolls, which have been toasted and diced into small squares. Do not chop the bread into crumbs. You want the texture.

Add the oregano, chilli flakes and basil to the meat. Mix together well and set aside.

Once the roasted eggplant is cool enough to handle remove the interior flesh, chop if necessary, and add to the filling. Don’t worry if all the flesh doesn’t come out. You need some for the halves to retain their shape.

Taste the filling for salt and pepper and adjust. Divide into four equal parts and stuff each eggplant, packing the filling in to help the eggplant halves retain its shape.

Place a quarter of the  mozzarella on top of each stuffed half. Bake in the oven for 20 more minutes until the cheese has melted and has started to brown on top.

Serve the eggplant with a side dish, such as pasta tossed with olive oil and breadcrumbs, a salad or some other complimentary Italian-esque dish.

* For the meat try substituting all ground lamb, or a mixture of beef and lamb.

If you like this post retweet it using the link at top right, or share it using any of the links below. Questions? Comments? Derogatory remarks?
Posted by Docaitta at 6:07 AM