Whats this? Blueberries! Oh, oh my G... Oh, thats better than sex! – Stewie Griffin (Family Guy TV show)
I did a bad thing the other day. I bought a 5 lb box of Nova Scotia wild blueberries. They’re for sale in the grocery stores now, but not for long… They're also a hefty price in my opinion. I bet the extra money isn't making it's way back to the growers. 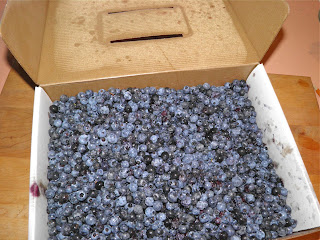 Why bad, you may ask? Have you ever tried to use a whole 5 lb box of blueberries with a family of two? It’s more difficult than it sounds. I’ve had several bowls with cream and sugar, a kéfir smoothie, and now this pie. It appears to me I actually have more than when I started. Are they multiplying? I doubt it, but they may as well be.
The problem with buying a whole box is not the volume per se, but the weight. You see, the sheer weight of the top blueberries tends to crush the ones on the bottom. You may have noticed if you have ever bought a box and after several (or a few) days the bottom gets wet. That’s what’s happening.
So you have to have a plan, or several plans, to tackle 5 lbs of blueberries. They’re SO good, and good for you, that’s it’s ridiculous to not buy in bulk. But if they go to waste I guess it’s not so much of a deal. So lay out a strategy. I have blueberry tarragon vinegar infusing now, and I'll probably freeze the rest. Check back in two weeks for the vinegar recipe. But come back sooner that that, too.
The first major dent in my box (4 cups to be exact) is for this pie. If you’ve never had blueberry pie you don’t know what you’re missing. It’s one of most people’s favourites, especially with wild, fresh berries.
For the crust, I opted for a lattice. You don’t really have to, but it’s so nice to see the pools of purple/blue surrounded by crust that you don’t get with a solid pastry. If you do a solid lid make sure to vent it well so the steam and bubbling liquid has somewhere to go.
By the way, successful crust is a lazy person’s job. The less you handle it the flakier it will be. I learned how to make crust from my father. He was always in a hurry and his pies were all the better for it.
You should try this, with the lattice. I’ve illustrated how to do it as best as I could. Hopefully the pictures will help. Click on each image to enlarge it.
Blueberry Pie with Lattice Crust
Pastry for double crust pie (see following)
4 cups wild blueberries
2/3 cup white sugar
7 tbsp cornstarch*
1 tsp cinnamon, ground
1/4 tsp allspice, ground
1/4 cup fresh lemon juice
1 tbsp butter
a pinch of salt
Pastry for a double crust 9" pie:
2 cups all-purpose flour
1 tsp salt
3/4 cup shortening or lard, chilled
1/2 cup ice water

* The amount of cornstarch above is for wild blueberries which tend to be "wetter." If using cultivated high bush berries, reduce to 5 to 6 tbsp.
To make the crust:
Combine the flour and salt in a bowl.  Cut in the lard or shortening until the size of peas – no smaller. Add most of the water and mix with a fork.
Add the remainder if necessary to bring it together as a shaggy dough. Do not over work, or your crust will not be flaky. The dough benefits from 1/2 hour refrigeration, if you have the time.
Divide in two, one part for the top another for the bottom.
To assemble the pie:
Place a cookie sheet in the oven and preheat to 400°F. Wash and pick through the blueberries, removing any leaves, and bits of stems.
Combine the sugar, cornstarch, cinnamon and allspice in a bowl. Add the blueberries and toss well to coat. Set aside.
Roll out the first half of the dough and fit it into a 9” pie pan. Trim the dough, but leave about 1” overhang. You will need this to seal the lattice.
Add in the coated blueberries. Pour the lemon juice over the berries. Add the pinch of salt and dot with bits of the butter.
Roll out the top crust and cut into 1/2” wide strips. Lay one strip down the centre of the pie. Lay another on top to make a cross shape.
Add the strips out from that point leaving space to see the blueberries, weaving them under and over to make a “basket weave” pattern.
Trim off the ends to the same length as the bottom crust.
Fold the bottom crust up over the lattice edges and press the top and bottom together. Flute the edge as you would a normal double crust pie. Sprinkle the top lattice with some additional sugar. It's a good thing.
Put the pie on the cookie sheet and bake in the centre of the oven for about 1 hour, until the blueberries are bubbly and the crust is golden. The cookie sheet will stop any unfortunate "accidents." Check progress at 50 minutes.
Let the pie cool for the filling to set up. It will slice and serve far easier once cooled.