The focus on my appearance has really surprised me. I've always been a size 14 to 16, I don't care about clothes, I'd rather spend my money on cigarettes and booze. – Adele
Vanilla is such a nice flavour. It’s almost indescribable. It does taste like nothing else. I suppose it could be said to taste like "ambrosia" or even “the nectar of the gods.”
Could you imagine capturing that at home in a liqueur, either for in mixed drinks with fruit juices or even a martini? Well you can…in two weeks from now if you start today.
You shouldn't use vanilla extract for this. You could, but it wouldn’t be anywhere near the same. You need a bean from the vanilla orchid. I have seen recipes that do use extract, but that would be cheating, wouldn't it. I can't imagine the result would be anywhere as good.
Vanilla Orchid
from Wikipedia
Vanilla, the vanilla orchids, form a flowering plant genus of about 110 species in the orchid family (Orchidaceae). The most widely known member is the Flat-leaved Vanilla (V. planifolia), from which commercial vanilla flavoring is derived. It is the only orchid widely used for industrial purposes (in the food industry and in the cosmetic industry). Another species often grown commercially but not on an industrial scale is the Pompona Vanilla (V. pompona).
This evergreen genus occurs worldwide in tropical and subtropical regions, from tropical America to tropical Asia, New Guinea and West Africa. It was known to the Aztecs for its flavoring qualities. The genus was established in 1754 by Plumier, based on J. Miller. The name came from the Spanish word "vainilla", diminutive form of "vaina" (meaning "sheath"), which is in turn derived from Latin "vagina".
So there. I hope that last word isn’t blocked when I try to post this on facebook!
In the kitchen
Vanilla is used in three ways in the kitchen. The pod is used whole, or can be ground into a powder. The most common product is vanilla extract, which also can be created at home by putting two split vanilla bean pods in 1 cup of vodka, brandy or bourbon and steeping for at least a month.
There is also artificial vanilla, but anyone who has ever compared the two knows they are as different as night and day. In actuality, different vanilla beans render substantially different results. It would be good for you to try several kinds to see what you like the best for cooking. My current favourite is Tahitian, followed closely by Madagascar. We were lucky enough to have a friend who brought us a bottle of Mexican from a trip. That was excellent as well. 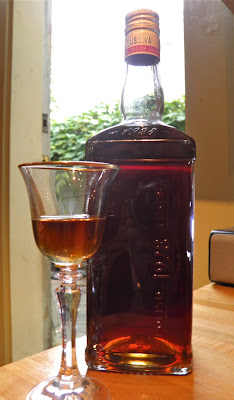 Vanilla Brandy Liqueur
Time: 2 weeks
Makes about 750 ml
1-1/2 cups water
3/4 cup packed light brown sugar
1/2 cup white sugar
1/2 vanilla bean, split lengthwise (about 4” long)
375 ml brandy (1 pint)
1 L mason jar
Bring the water, sugars and vanilla bean to a boil in a saucepan. Boil, not simmer, for 5 minutes. Let the liquid cool to almost room temperature.
Combine with the brandy and place in the mason jar with the vanilla bean still in the liquid. Let sit for 2 weeks at room temperature.
After the steeping time, strain out the vanilla bean and decant into individual bottles. This would make wonderful gifts.
This is great in mixed drinks such as martinis, over ice cream, on top of bread pudding or tossed with fruit for a stunning dessert.
I threw the small amount you see in the picture into my coffee this morning. That may or may not have been a good idea… Breakfast of champions.
………………………………..
If you like this post retweet it using the link at top right, or share using any of the links below.
Questions? Comments? Derogatory remarks?
Posted by Docaitta at 8:39 AM