Nowadays people know the price of everything and the value of nothing. – Oscar Wilde, The Picture of Dorian Gray

I had a birthday on Wednesday (21 again...). As I was leaving work many people asked what I was going to do for fun that evening.

In truth, at my age, doing nothing with a glass of wine sounds like a good idea. So that’s what I did. Except for cooking dinner. I really find it difficult to justify going out and dropping $100 on a dinner for two in these tight financial times.

So I spent my birthday in the kitchen. I guess that was a good present for myself. The kitchen is just about my favourite place to be.

Of course I couldn’t let it pass without doing something a little special. That’s what I had in mind when I trundled off to the grocery store. I had already settled on lobster. To me “treat” and “lobster” are the same word.

Just how my crustaceon was to land on the plate was up for conjecture.

I had come across a recipe earlier for lobster macaroni in a mozzarella cheese sauce that sounded really good, but by the time I was walking around the grocery it had morphed. It probably started with penne being on sale, and was given a coup de grâce by the cost of the required mascapone cheese. ($5 for 300 g – pricy.)

But back to the main ingredient, if I may. Try to help me understand this, please. I paid $10 for a (very slightly) over one-pound lobster, pre-cooked. There is no price difference per pound between live and cooked. The large chains will even cook yours for you if you're willing to wait.

This is lobster season in Nova Scotia. Currently the lobster fishers are being paid $3 per pound – or less. I understand there are steps involved between the ocean and the seafood counter, but it seems someone is making a bit of profit…

Last year this time they were selling at the grocery for about $6.50 if I remember correctly. And the fishers were getting the same cost as they are now at the wharf. 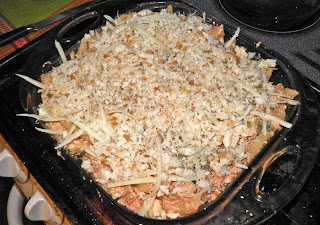 One of my Facebook friends at home is arranging with a fisher to bring a truckload of lobsters to the village where I grew up. Folks are placing their orders now. The seller is charging $5 per pound. He may need two trucks!

In the city, you can find lobster sellers in mall parking lots for about the same cost. Try Bayers Lake this weekend if you dare. It is getting close to Christmas. Support your local fishers if you can.

Well, I wasn’t in a mall parking lot. I was at the grocery, so I had to bite the bullet. At least it was cheaper than $18 per frozen can.

This recipe is really good, and a little unexpected with the lobster. It doesn’t have a “sauce” per se, unlike mac and cheese. It’s far drier.

The time listed does not include boiling and cleaning lobster, but I would recommend it. It’s so much better than canned, mechanically separated meat.

This would make an excellent buffet dish – just in case you’re attending one over the next week or two. It’s really just combine the sauce, then the penne and lobster and bake.

Enjoy! We did, and have some “birthday leftovers” too.

Cook the penne and drain. Preheat the oven to 400°F.

Clean the lobster and cut the meat into bite-sized pieces. Grate the slice of bread into crumbs.

Add the drained penne and half of the cheese. Mix well and then stir in the lobster.

Pour the mixture into the prepared pan. Sprinkle the remaining cheese on top and then the grated bread.

Add more pepper if desired and bake for 35 minutes, or until bubbly and golden.

If you like this post feel free to share it using any of the links. If you repost, please give me credit and a link back to this site. Questions? Comments? Derogatory remarks? Just ask!
Posted by Docaitta at 6:25 AM