Nobody grows old merely by living a number of years. We grow old by deserting our ideals. Years may wrinkle the skin, but to give up enthusiasm wrinkles the soul. – Samuel Ullman

This is an old recipe. Very old to be exact. It's from a medieval manuscript. Believe it or not, mustards are among the most mentioned sauces in surviving medieval food texts.

Mustard was cultivated and eaten in Rome, was known in France in the late 700s, and in England and Germany by the 1100s. Like the Romans, medieval mustard was created by pounding seed in a mortar and moistening with vinegar.

Differences occurred regionally as well as nationally. French mustards usually had spices. An English recipe of 1615 added onion and pepper. This recipe is English, but far earlier in date.

The use of mustard in medieval times was widespread. This had quite a lot to do with their health, or at least what they supposed would benefit their health. 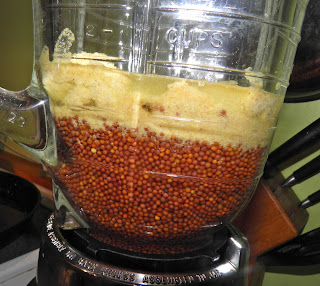 Mustard as a medieval medicinal
Up until the 1800s, medicine was a blend of observation and spirituality. This is illustrated by the medical theory of "humours."

The theory stated that within every person there were four humours (principal fluids) – black bile, yellow bile, phlegm, and blood. These were thought to be produced by various organs in the body, and they had to be in balance for a person to remain healthy.

The four humours were also associated with the four seasons: black bile with autumn, yellow bile with summer, phlegm with winter and blood with spring.

As an example of their thought process, too much phlegm in the body caused lung problems. The phlegm wasn’t a result – it was the cause. The balance of humours could be realigned by diet, medicines, and blood-letting (leeches).

The wet, winter humour (phlegm) was considered a common hazard. Since phlegm was cold and wet, the heat and "dryness" of mustard could therefore restore balance.

The basic recipe for mustard was simple. Ground mustard seeds (black was considered better than white) were moistened with grape must, vinegar or wine. Other ingredients were added depending on region. 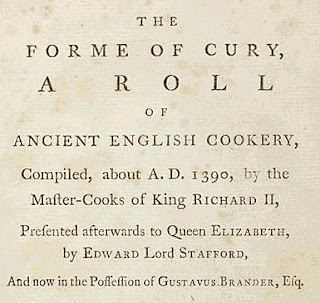 The Forme of Cury
This is my departure point to recreate this ancient condiment:
The Forme of Cury: A Roll Of Ancient English Cookery,
Compiled, about A.D. 1390, by the
Master-Cooks of King Richard II

The Forme of Cury, 'the (proper) method of cookery,' is the best known surviving guide to medieval cooking. The surviving manuscript contains around 200 recipes, compiled by the master cooks in the Royal Household of Richard II of England.

The original is now in the possession of the University of Manchester in the UK. They are currently digitizing it so we can all see it.

The recipes outline the foods prepared for the highest classes, including stews, roast dishes, jellies, tarts and custards. Contrary to what we may think about food for the rich, most recipes are rather basic by today's standards with little in the way of spice or sweetness.
As written in the manuscript:

Got that? I think I do. Just so you know, the wine vinegar only cost about $1.50 and the mustard seeds were $1.19. Pretty cheap for two most definitely gourmet gifts.

Place the seeds in small jar with a cover. Pour the white wine vinegar into the jar with the seeds. Shake and then let sit undisturbed for 24  hours.

Place the seeds and soaking liquid in a blender or food processor with the mustard powder, honey and sea salt. Process to a paste consistency.

Put in glass jars, and let sit at least 4 days before serving. The flavour will deepen over time.

*The original did not soak the mustard seeds, but since I wasn’t in the mood to hand grind 1/2 cup of seeds I opted for soaking and letting the blender do all the work.