It is only the modern that ever becomes old-fashioned. – Oscar Wilde

Dilemmas. I face many in the run of a day but none seemed more pressing than the other night when I had a craving for something sweet to eat and no money in my pocket. Oh, and only one egg in the house. Desperate times, indeed.

I had pretty well set my mind (stomach?) on a cake and I was wondering if I could even make one with just one egg. So off I went in search with my stalwart friend, Mr. Google. Or perhaps the right term is “in search IN”…

In no time flat I had a plethora of recipes to choose from, but it only took a second for me to decide. Someone had posted their grandmother’s one-egg cake on a recipe forum. Who in their right mind could resist a grandmother’s cake?

Not me. But I did change the recipe significantly. (Of course…)

The original recipe had rave reviews by a string of happy cake-eaters. So I thought “why not” and I went and got my lonely egg from the refrigerator.

The ingredients list looked like it only made a small cake, but what can one expect with one egg? It also had the sketchiest directions I have seen short of my Great Aunt Hilda’s recipe cards. Grandma (and Aunt Hilda) knew what they were doing. Shouldn’t I?

Actually I do. There are a couple fundamentals that you need to know to make a decent cake.

The first is to get air into the sugar/shortening (or butter) mix. Beat the heck out of it. You need it as light and fluffy as you can get it, with most of the sugar crystals "melted" into the shortening. Do it long enough and the two will change consistency. Magic…

The second is to have enough wet ingredients, but not too much. I believe this cake was a bit too stiff for my liking. If I do it again I would up the milk to 3/4 cup. It didn’t so much pour into the pan as glop into the pan. At that stage I was having serious doubts.

This was a pretty quick thing, all in all. I can imagine that grandmother getting a call from friends that they would be over for tea in an hour. And then grandmother scrambling to have something sweet for on the table.

This recipe would certainly work for that situation. I can see it all now: tea, milk, gossip and cake.

What did I change in the recipe? I substituted brown sugar for white, added some autumnal spices and sprinkled the top with large grain sugar. It made for tasty eating and cured my craving.

The batter only came about an inch up the pan, which was also a little worrisome but I was willing to give the baking powder a chance to do its thing. It all worked very nicely, thank you very much.

A most unpromising looking batter, but a wonderful little cake! It’s amazing what old-fashioned delivers that modern can never attain. 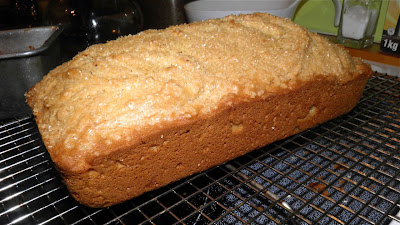 Beat together the brown sugar and shortening until it is incorporated. It will not get light and fluffy like butter and white sugar, but will change significantly.

Add in the remaining ingredients, one at a time, mixing well after each addition.

Grease a 4"x8" loaf pan with butter or shortening. Pour the batter into the prepared pan and sprinkle with the large crystal sugar.

Bake for about 30 minutes or until a toothpick inserted in the cake comes out clean.

Oh, and don't forget to put on a pot of tea.

If you like this post retweet it using the link at top right, or share it using any of the links below.
Questions? Comments? derogatory remarks?
Posted by Docaitta at 5:47 AM