Recipe: How to make Pork and Shrimp Wontons, and a soup recipe

The superior man does not, even for the space of a single meal, act contrary to virtue. – Confucius
Wontons are one of those things we usually grab from the freezer in the local Asian grocery. Why not try to make them at home? They're not difficult. Only slightly time consuming. It's a shame that more people don't try their hand at making them fresh.
Before you stop reading consider this — when you buy a package of wontons you get about 12-16 in a package. This recipe makes at least 50. So you're making more than enough for 3 meals. So in your mind divide the time these take by 3.
These wontons are head and shoulders above any frozen packaged ones I have purchased. And the difficulty isn't in complexity, just in time. It took me 1 hour to fill 52, but I was a little slow. They did start to go along faster once I hit my stride.
I really suggest you try these. You will be more than pleased with the result. The recipe is for shrimp and pork, but you can make all pork, all shrimp, crab and pork, just crab or even vegetarian. Many other variations exist as well. Next lobster season I may just try my hand at that for a filling. They would probably be fantastic steamed or fried!
Excess wontons can be frozen in an airtight container. You can steam the wontons from frozen with great results (5 minutes in a steamer). If you want to fry them, boil first until they float and then pan fry in a little oil until crisp.
If you really get into making wontons, you should search out alternate folding techniques. This site shows 8: http://www.homemade-chinese-soups.com/how-to-fold-wontons.html
Pork and Shrimp Wontons (about 50):
1 pkg square wonton wrappers
200 g pork, chopped into medium pieces
120 g raw shrimp, peeled
1" fresh ginger, peeled and chopped
5 dried shiitake mushrooms, reconstituted on hot water
1 tsp sesame oil
1 tbsp sherry
1 tbsp soy sauce
1/4 tsp salt
1/2 tsp pepper
3 green onions, sliced and chopped
1 egg, beaten
Place the pork in a food processor and pulse until ground. Remove to a bowl.
Add the ginger and mushrooms to the food processor. Pulse until well chopped. Add the shrimp and pulse until ground.
Add the pork back into the food processor and pulse to combine. Add the salt, pepper, oil, sherry and soy to the mixture. Remove to a bowl and stir in the green onions. That's as easy as it is to make the filling.

If making variations in the future, just be aware of the volume of filling this makes. You will need the same amount to fill 50.
To make the wontons:
Your hands will get a little messy so have everything at hand. The directions may sound complicated, but once you make the first one you will understand clearly. Then filling the remainder will go more quickly.
Beat the egg in a small bowl and set aside. This is your "glue" to seal the wontons so the filling doesn't escape in cooking.

Lightly flour the surface you will be working on. Make sure you have everything you need nearby. (Egg is at bottom left, flour at bottom right and filling at top right in the photo below. Wrappers are out of shot at top left.) 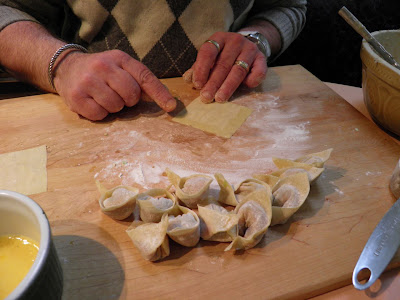 Take one wrapper and place it on the board.
Using your finger, moisten two adjacent edges of the wrapper with the beaten egg. 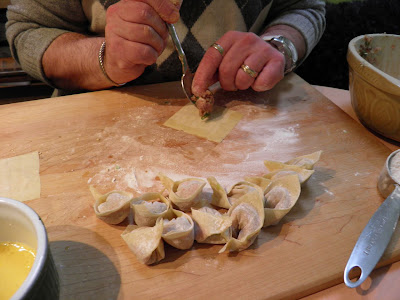 Place a rounded teaspoon of filling in the centre.
(You'll know how much filling to put in after you make the first wonton.) 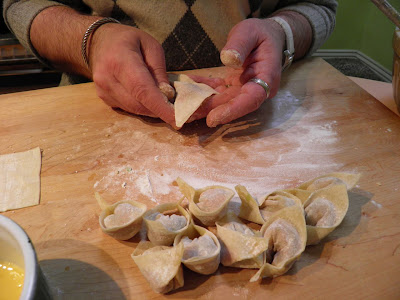 Fold the wrapper over itself to make a triangle. 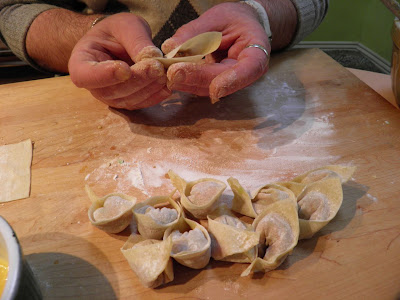 Pinch the edges closed to seal the filling in the centre. 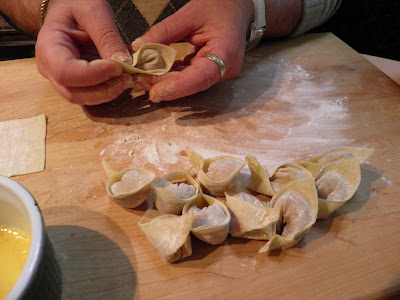 Lay the triangle down with the centre point facing away from you.
Moisten one of the bottom (long) points with a little egg. Bring the two points together and pinch to close.
You will end up with what looks kind of  like a little hat. Repeat with more wrappers until all the filling is used. The filling will make approximately 50 wontons.
Remaining wontons can be frozen for later use, as the soup requires only 12-16.
Recipe: Pork and Shrimp Wonton Soup
Makes 4-6 servings
8 cups chicken broth
1-1/2" fresh ginger, peeled and grated
1 tbsp dried shrimp, chopped
1 tbsp oyster sauce
2 tsp sesame oil
1/2 tsp salt
220g dried chinese wheat noodles (1/2 package)
16 wontons (from recipe above)
16 baby pak choi, halved if desired
3 green onions, sliced on the diagonal
salt to taste
Combine the stock, ginger, dried shrimp, oyster sauce, sesame oil and salt in a stock pot. Bring to a boil and simmer for 10 minutes.
Add 16 wontons and the noodles to the broth. Bring back to a boil, reduce heat to medium and let simmer for 5 minutes.
Add the pak choi and simmer for 2 minutes more. The pak choi will still be slightly crisp.
Taste for salt. The oyster sauce is very salty so don't just add salt because you think you should. Serve with the green onions and a drizzle of sesame oil atop each bowl.


I would try my hand at making my own Chinese noodles, but seeing them being made it looks like quite a process. Maybe... you never know. If you're interested, here's a link to a video. Amazing.
http://www.youtube.com/watch?v=jfBC-8azrvA
…………………………………
If you like this post retweet it using the link at top right, or share using any of the links below.
Questions? Comments? Derogatory remarks?
Posted by Docaitta at 7:30 AM