I felt trapped and fabricated in the fifties living up to other people's expectations. – Rosemary Clooney
Rosemary Clooney was a wonderful singer and rosemary is a wonderful herb. That’s a good thing because this recipe has a fair amount of rosemary in it, although it’s a shame Ms. Clooney felt the way she did in the quote… I imagine a lot of women felt the same way back then.

International Women's Day is held annually on March 8. Trying to live up to the June Cleaver image of to 50s was an unrealistic goal for most women. Read more HERE.
Besides adding delicious flavour to food, rosemary (the herb)  is beginning to prove to have exceptional medical potential as well.
The use of rosemary helps to stimulate the immune system, increase circulation, and improve digestion. Rosemary also contains anti-inflammatory compounds that may help reduce the severity of asthma attacks.
Two of the most important ingredients in rosemary are caffeic acid and rosemarinic acid, both potent antioxidant and anti-inflammatory agents. They are effective at reducing inflammation which may contribute to asthma, liver disease and heart disease.
Rosemary has also been shown to increase the blood flow to the head and brain, improving concentration. No wonder in ancient times it was thought to improve memory.
But that’s not all. Rosemary is proving to be a potential defense against certain cancers as well. Rosemary’s antioxidant properties help to protect cells from damage by free radicals.

The active chemicals are monoterpenes, phenolic diterpenes and flavonoids, which have proven to slow down the production of free radicals in the body. Rosemary is also a rich source of Vitamin E, another antioxidant, which contributes more to its free radical fighting abilities.
Scientists from the Department of Mutagenesis and Carcinogenesis, Cancer Research Institute of the Slovak Academy of Sciences, Slovakia, have discovered extract of rosemary can significantly help protect human DNA against free radical damage.
Does any one else find it odd that we have so many diseases now that were rare (didn't exist) before our diets consisted of so many chemically altered foods? Cook your own food, bought from local sources if possible. Make yourself and your family healthier. It doesn't mean we're hauled back into the days of 1950s America. Cooking is best when it's a group event. It's about health – not servitude.
Try to grow some rosemary in your garden this year. It’s not that difficult. Just give it a sunny spot with good soil and sit back. Sadly, rosemary doesn’t overwinter outside in Nova Scotia. But I guess that’s all the more reason to use vast quantities of whatever you do grow so it doesn’t go to waste! 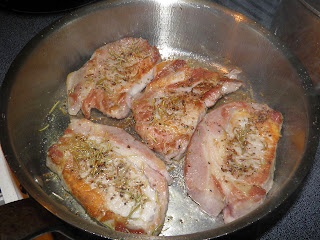 Rosemary Pork Chops with Potato Turnip Mash
Time: about 20-25 min  |  Serves 4
4 boneless pork loin chops (about 3/4" to 1" thick)
2 tbps of olive oil
2 tbsp fresh rosemary, chopped (or 2 tsp dried)
1 medium onion, thinly sliced
2 garlic cloves, chopped
1 cup apple cider, plus a splash
2 tbsp of butter
salt & pepper
Heat the oil in a frying pan. Season the chops with salt and pepper and press 1 tbsp of rosemary into both sides of the meat. Sear the chops in the hot oil. Remove and set aside on a plate to rest.

Deglaze the pan with a splash of apple cider. Add the onion to the oil and  cook until it begins to soften. Then add the garlic and 1 tbsp of rosemary. Let cook for about 1 minute.
Then pour in the remaining 1 cup of apple cider. Nestle the chops back into the pan. Let them cook until the sauce reduces to a thin glaze, about 10 minutes on medium heat. Turn the chops once.
Just before serving, once again remove the chops to a plate. Turn the heat off under the sauce. Add 1/4 cup butter to the sauce and let it melt into the sauce.

Serve with the Potato Turnip Mash.
Potato Turnip Mash
Prep: 10 min  |  Cook: 15-20 min  |  Serves 4
3 potatoes
1 small(ish) turnip (or rutabaga)
1 tbsp fresh rosemary (or 1 tsp dried)
1/4 cup butter
salt & pepper to taste
Peel and cube both the potatoes and turnip/rutabaga. Make sure your turnip cubes are smaller than the potato. Potatoes aren’t as dense and therefore cook faster.
Cover with lots of salted water. Bring to a boil and let cook for between 15-20 minutes, until both vegetables can be pierced with a fork.
Drain. Add the rosemary, butter and pepper (to taste) and mash.

…………………………………
If you like this post retweet it using the link at top right, or share using any of the links below. Questions? Comments? Derogatory remarks?
Posted by Docaitta at 5:57 AM