Why is there an expiration date on sour cream? – George Carlin
Here’s another in my ongoing saga of quick (or relatively quick) dinners for you to try. They're a godsend when you're pressed for time or want to get dinner on the table after a long day in the salt mines.
I’ll start by saying this recipe is not low fat. Take a look at the ingredients list: bacon, butter and sour cream. That pretty much tells the story. And what a good story it is.
Sometimes a person just needs something “comforting.” To me that means fatty. Just don’t do it all the time and you’ll be fine. Julia Child and I agree on that point.
I posted a pork stroganoff recipe earlier (here) that’s very good and switches the meat from beef to pork. This one takes another turn from the traditional in that it uses bacon. I saw that ingredient in my researching for this recipe. I had never heard of including it before, and it works nicely.

Another "first" for me and stroganoff is that I fried the steak before slicing it. This works to your benefit two ways. First you get a nice sear on the meat. Second, by adding the steak back in at the end, you don't over cook it and make it tough. This will now be my preferred method.
This stroganoff has enough interesting flavours going on to satisfy anyone’s cravings. If you’ve had bland stroganoff before don’t expect it from this recipe.
There’s enough nutmeg to get noticed, the Worcestershire adds complexity and the sour cream with it’s tartness brings it all together nicely.
Of course it’s always good to use sherry when cooking. Sometimes I even put some in the food… Actually it all goes into the food. It’s not a favourite libation of mine. But it works here!
Beef Stroganoff with Bacon
Prep: 5 min  |  Cook: 20 min  |  Serves 4
1 lb steak
1 tbsp vegetable oil
6 slices bacon, chopped
1 medium onion, halved and sliced
2 cloves garlic, chopped
3/4 lb crimini mushrooms, sliced
3/4 cup beef broth
1/2 cup sherry (divided in two)
2 tbsp flour
2 tbsp butter
1 cup sour cream
1/2 tsp nutmeg
1 tbsp Worcestershire sauce
1 tsp salt
2 tsp cracked black pepper
Heat the oil in a wide saucepan. Season the steak with salt and pepper and fry (whole) on high heat until nicely browned, about 3 minutes per side. The steak will not be cooked through. Remove the steak to a plate. 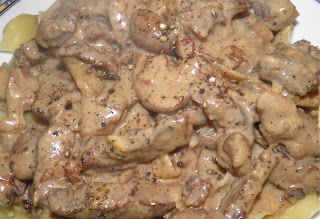 Add the bacon to the pot and fry until it begins to brown. Pour in 1/4 cup sherry and deglaze the pan, scraping any brown bits from the bottom.
Add the sliced onion and garlic and sauté for a few minutes until the onion begins to brown. Then add the mushrooms and cook for a further 5 minutes.
Sprinkle the mixture with the flour and mix well. Then add the broth and remaining sherry and let cook until thickened. Reduce the heat to medium.
Slice the steak and add to the pot with any collected juices. Toss well and let the steak finish cooking in the sauce.
Stir in the butter until melted and then add the sour cream, nutmeg, Worcestershire and any remaining salt and pepper.
Serve atop buttered wide egg noodles. Yes, more butter...
…………………………………..
If you like this post retweet it using the link at top right, or share using any of the links below.
Questions? Comments? Derogatory remarks?
Posted by Docaitta at 6:23 AM