Politicians say they're beefing up our economy. Most don't know beef from pork. – Harold Lowman
There’s an undeniable chill in the air today. It feels like Autumn. That’s actually not fair, because Summer still has nearly two weeks before it departs for the year.
Overnight the temperature was supposed to go down to 6°C. I know at times on our walk this morning you could see your breath. That’s low and I'm not really impressed by it. Looking back over the past Summer it seems we hardly had a real one at all... So the best solutions? 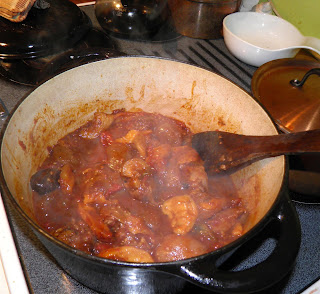 How about good company, a glass of wine, a bit of a blaze in the fireplace, and something deep and delicious for dinner? This recipe fulfills one requirement. You’ll have to supply the friends, embers and red.
First off, I want to state that pork hocks are NOT pork feet. They’re further up the leg. Think of them as pig forearms… The meat is actually quite dark as opposed to the white we associate with cuts like chops. It also gets extremely tender and falls apart when braised for a long time.
When browning the meat leave the skin on. Don’t worry about the fat. Very little renders out during the braising. When it is browning there’s a definite aroma of "bacon" that comes from the pot.

When you’re taking the meat off the bones later in the recipe, discard the skin. Before that time the skin and bone are important to add depth and flavour to the dish.
This is a very satisfying meal. The thyme, juniper and cinnamon might seem like an odd combination, but they’re not. This is a recipe you should try, especially when you can purchase three hocks to feed four people for about $5.50.
Braised Pork Hocks with Dried Fruit and Spice
Time: 2 hours  |  Serves 4 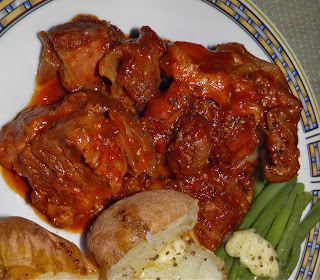 2 tbsp olive oil
3 pork hocks
1 lg onion
4 garlic cloves
1 lg (796 lm) can whole tomatoes
1 cup red wine
1 tsp cinnamon
1 tsp thyme
6 whole juniper berries
2 cups mixed dried fruit (apples, prunes, apricots)
salt and pepper, to taste
Heat the oil in a Dutch oven. Sprinkle the hocks with salt and pepper and sear on all sides. Remove the hocks from the pot to a plate.
Add the onions and garlic and sauté until the onions become softened. Pour in the red wine and scrape the bottom to loosen any browned bits. Add the tomatoes and spices and mix well.
Nestle the browned hocks into the liquid, cover and simmer for 1 hour. Turn the hocks every 15 minutes.
At the end of the hour, remove the hocks from the pot. Separate off the skin and chop the meat from the bones. Add the fruit, stir together and re-cover.
Simmer for a further 30 minutes. Taste for salt and pepper.
Serve with baked potatoes and steamed green beans, both with butter.
.......................................
If you like this post retweet it using the link at top right, or share using any of the links below.
Questions? Comments? Derogatory remarks?
Posted by Docaitta at 7:43 AM