I want to have a good body, but not as much as I want dessert. – Jason Love
I have a childhood remembrance. They're kind of funny, though. It’s almost like you transform your memory into the ideal of whatever it is you remember. I know I have with this memory. It’s become sort of an obsession. And all over something as innocuous as tarts.
When I was a child there was a small family-run business in Liverpool named Semone’s Bakery. Our family used to frequently stop there after the weekly grocery shopping – just before we started on our way home.

I think that my parents felt the shortest time we kids were in the car with the cookies and such the better the drive would be. They were right. We started to beg the moment we left town.
The bakery was in an old-style storefront with large window displays and a recessed entrance. Once you entered, there were two wood and glass display cases running parallel down each side. Both were filled with all manner of wonderful things to eat.
There were rolls and breads of all kinds, of course, which filled the air with homey aromas. Besides the breads were rows of sweets arranged on paper lined baking sheets. Although there were many, I really remember two in particular.
They sold the best gingerbread men, with eyes and buttons made by dots of red food dye. But my favourite were the “egg” tarts. Not butter tarts, not chess tartlets, not Portuguese tarts. They were unique. Not too sweet, not too custardy. Indescribable actually.
Mr. Semone passed away many years ago and the bakery has long since been torn down. With its closure went the breads, rolls, gingerbread men – and the egg tarts.
For a while now I have been trying to find “his” recipe. I assumed for a long time that it was just another egg tart and all I had to do was find the right one.

But I never have. I think he made his recipe up or it was a family recipe. So I now have a challenge. Rediscover a recipe that has been lost – from only an idealized memory. Fun.
I don’t like butter tarts because they’re way to sweet. Almost teeth rattling sweet. The same holds true for chess tartlets.

Portuguese tarts are excellent and I love making the swirled bottom crust (check out a recipe if you don’t know what I mean). But Portuguese tarts are eggy. They are, after all, a variant on custard. My ideal tarts are somewhat sweet, yet somewhat custardy.
This recipe is attempt No. 1. These are head and shoulders above sugary butter tarts and sweeter than custard. They’re a set filling but neither a custard or sugar. Quite interesting.

It’s not quite what I remember but they’re very good. I’m going to keep trying so expect Semone No. 2, No. 3, etc.
In the meantime, try this recipe. They're really good and have a great little butter crust. 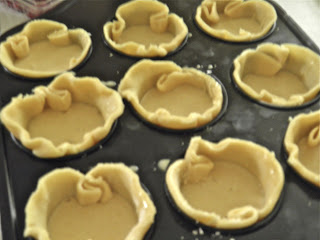 For the filling:
3 eggs
1/3 cup light brown sugar
1/2 cup white corn syrup
1/3 cup melted butter
1/3 cup cream
1 tsp vanilla
pinch of salt
For the crust:
2 cups white flour
1 cup chilled butter
1 egg yolk
1/4 cup ice water
Make the crust first. Cut the chilled butter into the flour until the size of peas. Mix the egg yolk with the water, pour over the flour/butter and mix with a fork.
Use your hand to bring the dough together, but work quickly. The heat of your hand will melt the butter if you don’t do it fast. Not all of the flour needs to be incorporated. The dough will tell you what’s enough. Don’t try to force it.
Refrigerate the dough for 15 minutes. Preheat the oven to 400°F. 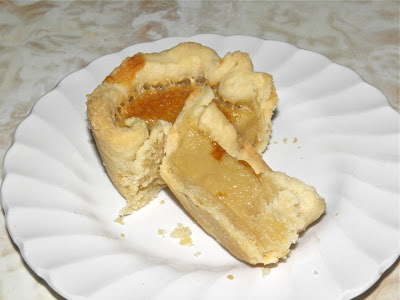 While the dough is in the fridge and the oven is heating make the filling. Combine all the ingredients in a bowl and beat with a mixer on “high” for 4 minutes.
Roll the dough out on a floured board until it is quite thin. Use something round to cut 5” circles of dough out and line 12 tart shells.

You will have to recombine the dough pieces and re-roll to get 12 circles, but that’s OK. Just don’t handle it too much because of the butter. The dough recipe will have very little waste when you're done.
Pour a scant 1/4 cup of filling into each lined tart. Make sure all tarts have the same filling amount. It will probably be about 3/4 the way up the pastry.
Bake in the preheated oven for 15-17 minutes, or until slightly puffed and browned on top. Remove from the oven and let cool for 15 minutes. Then remove the tarts from the pan to a rack and let cool completely.
To gild this particular lily you could whip some cream and place a dollop on top of each tart just before serving.


………………………………….
If you like this post retweet it using the link at top right, or share using any of the links below.
Questions? Comments? Derogatory remarks?
Posted by Docaitta at 8:25 AM