Tradition is not the worship of ashes, but the preservation of fire. Gustav Mahler

This recipe is an idea for our friends in the USA who will be celebrating their Thanksgiving tomorrow. I would imagine that many of you will be finding yourselves in the kitchen, frantically preparing for the festivities.

Almost certainly part of that celebration will be in pie form. And most probably pumpkin.

But what about those who don't really care for pumpkin pie? There really should be a delicious option for them. I'm OK with pumpkin pie but if there's another option I would probably gravitate toward it, or even have a slice of both! 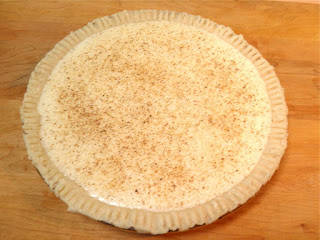 Have you ever thought about a traditional old-fashioned custard pie for your second option? If not, you really should. Creamy smooth with a fantastic crust and just a hint of nutmeg it has all one would expect from a holiday classic. And beautiful to bring to the table? You bet!

This is at least a 1950s recipe if not earlier, so has lots of tradition behind it. It's an uncommon pie today and that's a real shame, because it's a really great pie. Plus it's very easy to make.

I have fond memories of this pie. They come from my childhood when the local Women's Institute in a neighbouring village used to host a "Pie Aid" and handmade items fundraiser almost every month.

The Women's Institute of Canada is an organization that was established over 100 years ago to support women and their families in rural areas. Still active, they provide valuable resources for their members, as well as education on nutrition and help in raising families. Members also volunteer for the benefit of the communities where they are active.

The Pie Aids were hosted in different members homes in rotation. They were as much fundraiser as they were social activity. Mom, dad and I used to get in the car and drive the five miles for every one.

There were some amazing pie makers, and knitters and tatters—look up tatting if you don't know what it is and be amazed—each proud to make their own specialty.

The secret to good pie pastry is to not, in my father's words, "maul it." Dad used to make all our pies. He was always in a hurry and this worked to his benefit. Just touch the dough enough to bring it together. Not ONE SECOND more. If you follow the directions in the recipe below you will have success.

This recipe, from the old cookbook is so close to what we used to have at those Pie Aids it isn't even funny. When I made this pie I have to say it was extremely easy and the result was amazingly delicious… So here it is, for you to turn into your own holiday tradition.

This pastry recipe is for a 9" single crust pie from "Fanny Farmer." Tried and true.

Mix the flour and salt. Cut the shortening in to the size of peas. Do not make it any finer. If you do you won't have a flaky crust. Add enough water just to bring it together as a shaggy dough. Check the picture above.

Roll out on a board with just enough flour so it doesn't stick. Lift and place in the pie plate. Do not flute the edge, but rather leave plain trimmed with the edge of the plate, or impressed with the tines of a fork. Refrigerate for at least 30 minutes before filling and baking. 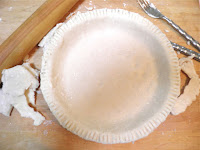 There are two different ways to proceed at this point. The first is to fill it and bake. This results in a soft bottom crust that some prefer and some don't. If desired you can partly pre-bake the shell. Prick the bottom with a fork and bake at 400°F for 15 minutes before filling. I didn't. That's the way I remember the pie from the Pie Aids, but it's your call.

Preheat oven to 400°F. Adjust rack to 5-6 inches from the bottom of the oven.

Scald the milk in the top of a double boiler.(Milk is scalded when bubbles form at the very edge of the pan. Don't let it boil.) After scalding, cover to avoid a skin from forming.

Beat the eggs until the yolks and whites are thoroughly mixed. Add the sugar, salt and scalded milk slowly, stirring constantly.

Quickly strain the custard mixture, add the vanilla and pour, except for 1/3 cup, into the prepared crust. 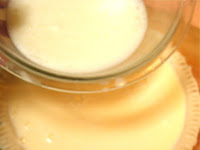 Beat the remaining custard until very foamy and then gently flow it over the top of the custard already in the pie shell. Sprinkle with grated nutmeg.

Bake for 25 to 30 minutes or until the custard is set except for about 1" in the very centre of the pie. Test for doneness by gently jiggling the pie plate. It should look set but shake in the centre. It will continue to cook after being removed from the oven.

Let cool for 2-3 hours before serving. This pie is best served the day of baking.

©2021 Docaitta Lifestyle. Feel free to disseminate on any and all of your social media orifices. The more the merrier. :-)